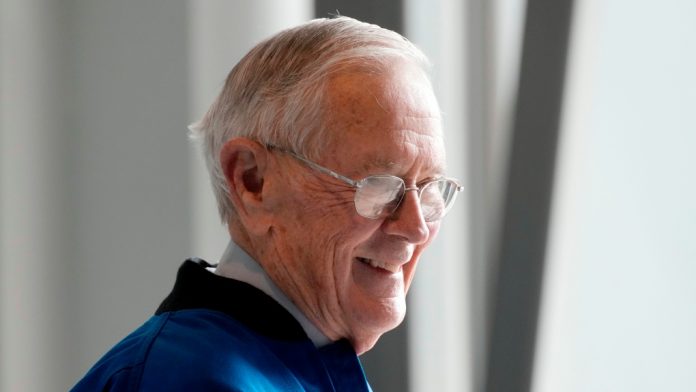 
Fifty years after his Apollo 16 mission to the moon, retired NASA astronaut Charlie Duke says he’s ready for the U.S. to get back to lunar exploration.


Part of that effort, Duke said Friday, will come in the form of the Artemis program, which includes NASA’s upcoming flight to the moon using its new Space Launch System rocket. The first of the huge rockets is supposed to blast off without crew later this year, with crewed flights planned subsequently.


“With Artemis, NASA is going to be focused on deep space, to the moon and beyond, and I’m excited about that,” Duke told The Associated Press in an interview in Columbia.


Duke, 86, is one of four surviving moonwalkers from the Apollo program, taking Apollo 16 to the lunar surface in 1972. He has been making the rounds to mark the 50th anniversary of his voyage, recently taking a trip to the U.S. Space and Rocket Center in Huntsville, Alabama, to visit his spaceship, which made the next-to-the-last U.S. mission to land on the moon.


The late John Young was first out of the lander and walked on the moon with Duke. Ken Mattingly orbited the moon in the command module, nicknamed “Casper.”


Duke said he does not begrudge NASA for ending the Apollo program to focus on space shuttles, the international space station and other missions in more remote parts of space. But he looks forward to future missions that build off of what he and others have learned from their time on the moon, which called “a great platform for science.”


Duke also noted that he’s encouraged by the commercial partnerships that have developed around space exploration, like Space X and Blue Origin. Those options, he said, “make space available for more people and more science and engineering and unmanned stuff.”


“That compliment is going to be really important in the future,” Duke went on. “The more people we get into space, who can see the beauty of the Earth … it’s going to affect a lot of people.”


On Friday, Duke visited the South Carolina State Museum in Columbia, which houses an exhibit full of some of his mementos from the moon, including a space suit, check list and moon rock. A series of placards describe the voyage and also include a flight drawing Duke made as a child on some of his arithmetic work.


Speaking with middle school students from his native Lancaster, South Carolina, Duke’s eyes sparkled as he narrated a 16-minute planetarium video of his time on the moon’s surface, drawing laughs as he described how easy it was to tumble or drop things in the low-gravity environment.


“ï»¿I just encourage you stick with it in school, to hang in there, and all the best in your careers, as you continue to grow up and mature in life,” Duke told the students. “I’ve discovered in my life that, if you keep those antennas up, if you keep focused on your life, and do things that you like to do, and take care of yourself, there are unlimited possibilities.”


Asked about his continuing contributions to U.S. space programs, which includes consulting with a company trying to win a contract for a new lunar rover, Duke said he will keep going as long as he’s able.


“I flunked retirement,” Duke said, with a laugh. “As long as the Lord is willing and gives me the ability physically to do it, I want to challenge America and challenge the kids to aim high. … Everybody’s not going to listen, but maybe one or two will.”

When will the COVID-19 pandemic officially be over? It’s complicated, experts say – National