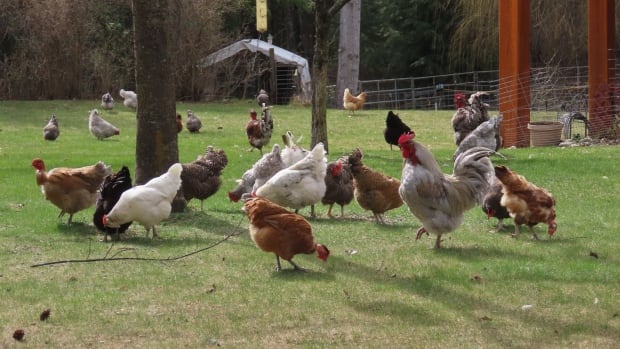 A new strain of avian flu that’s sweeping across Canada and around the world is now in B.C. and a West Kootenay chicken farmer says it may have wiped out 80 per cent of her flock.

Peggy Ife farms near Burton, a tiny community in rural southeastern B.C., and says her flock of 70 chickens was down to a dozen after just four days.

She expects within the next two days, her entire flock will be gone.

Ife said some of her birds were lethargic and uninterested in food. After some research, she determined it was likely her birds had contracted avian flu.

“I know my girls really well because I spend a lot of time with them,” she said.

Her “girls” have been with her for several years; one of the chickens she lost had made it to the ripe old age of 14.

“Some people think it’s kind of funny, but I call them my therapy. If I’m having a bad day or things haven’t been going right, I go down and I spend the day talking to the girls,” Ife said.

She believes bird feeders, intended for wild birds in the area, spread the virus to her domestic chickens.

Environment Canada researcher Jennifer Provencher says avian flu is common, but this particular strain is more deadly than others. It’s spread through oral and fecal secretions.

Officials in other provinces are advising residents to stop filling their feeders and bird baths temporarily to reduce the spread of the virus.

Ife says investigators with the Canadian Food Inspection Agency (CFIA) visited her farm Monday to determine the cause of the deaths, as it may not be the avian flu. She expects to hear the results on Wednesday.

However, last week a poultry farm in Enderby in B.C.’s north Okanagan was placed under quarantine after the virus was detected in its flock, according to the CFIA.

On Monday, B.C.’s Ministry of Food and Agriculture announced new cases had been identified in a backyard poultry flock in Kelowna.

Additionally, a bald eagle found in Delta tested positive for the virus, making it the second bald eagle to test positive, after one in Vancouver in February.

The province is urging poultry farmers to be vigilant and put preventative measures in place, such as eliminating or reducing opportunities for contact with wild birds, reducing human access to the flock and increased cleaning and sanitization.

Provencher said the avian flu can sicken any bird, and it’s important to watch for signs of the virus and report any suspicions to officials.

According to Environment and Climate Change Canada, symptoms include tremors, lack of coordination, swelling around the head, neck and eyes, lack of energy, coughing, gasping for air, diarrhea or sudden death.

Sick birds should be reported to the Ministry of Forests, Lands, Natural Resource Operations and Rural Development at 250-751-3234 in B.C., or the Canadian Wildlife Health Cooperative at 1-800-567-2033.

Radio West17:33Avian flu is suspected to be the cause of death that killed dozens of chickens at a B.C. farm

Avian flu is suspected to be the cause of death that killed dozens of chickens at a Burton, B.C., farm. 17:33