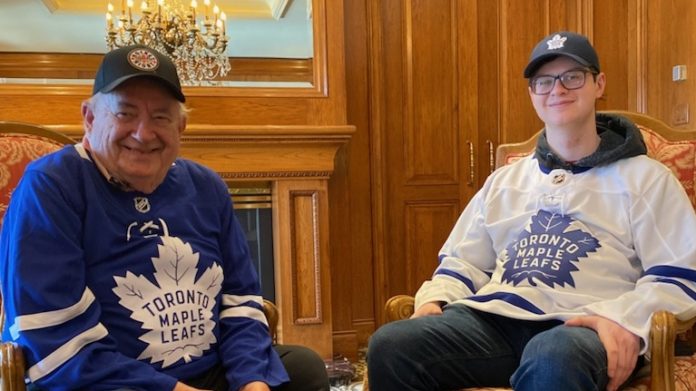 It’s a wish more than 50 years in the making.

A 78-year-old avid Toronto Maple Leafs fan from Nova Scotia is getting the opportunity to see his favourite team play in person tonight thanks to a charity that grants unfulfilled wishes to seniors.

What’s more, when Eric MacDonald sits down to watch the Leafs take on the Boston Bruins at the Scotiabank Arena Friday night, he will be wearing a device that will allow him to actually see the players.

MacDonald is visually impaired. For over 10 years he hasn’t been able to see the faces of his grandkids.

“I’ll probably feel happy about it when I get there,” he told CTV News Your Morning ahead of the game. “When I actually get in there and see the size and the number of people.”

“I’d like to see Auston Matthews score a couple goals.”

Katie Mahoney, co-founder of the charity We Are Young, said that Eric is one of 20 to 30 seniors whose wishes will come true this year. His love of his family and his struggle with his vision was what made him stand out from other applicants.

“He’s such an avid Toronto Maple Leafs fan and despite not being able to see, still wanted to go see the game to hear it and be amongst the crowd. It just spoke to us,” she told CTV News Toronto.

Mahoney said that MacDonald last saw a Leafs game when he was 18 through a corporate event, but he was in the nosebleed section.

“He joked that he never actually got to see the game,” she told CTV News Toronto.

We Are Young partnered with a company called eSight, who donated a pair of special goggles to MacDonald to use for the night. The glasses allow people with low vision and who are legally blind to see with 20/20 vision.

MacDonald travelled to Toronto with his grandkids, and when testing the glasses, saw the face of his grandson for the first time since he was nine years old.

He said that if his grandson hadn’t talked to him, he wouldn’t have known it was him.

“One of my youngest (grandkids), he just turned 11,” MacDonald said. “And I’ve never actually seen him until the glasses.”

After meeting MacDonald, representatives with E-Sight decided to gift him the glasses, knowing how difficult it would be to be given the gift of vision and then having it taken away.

“I don’t know what to say,” he said on Your Morning, adding that he can’t wait to head outside and see the people he has been waving at.

Mahoney said that We Are Young is sorting through a backlog of applications due to the pandemic. Over the last few years, they have been unable to grant some of the bigger wishes, instead focusing on sending nearly 4,000 care packages to seniors who were isolated and lonely, granting “little wishes” as Mohoney put it.

The charity operates primarily on donations and will soon be launching a new program called “Monthly Wish Champion” that would help fund a wish a month.