Blood donation ban on men who have sex with men can end: Health Canada – National 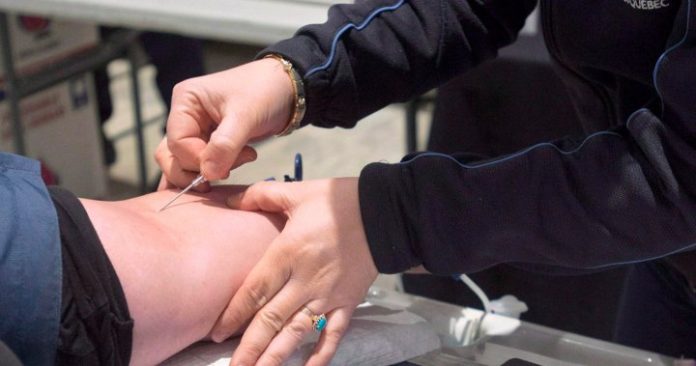 Health Canada has given Canadian Blood Services the green light to lift specific restrictions on blood donations from men who have sex with men.

The federal regulator said in a news release Thursday it has now authorized a request from Canadian Blood Services to lift the restrictions around screening questions for men who have sex with men that banned them from donating blood for three months.

The move officially greenlights a policy change by the blood service that officials said is expected by Sept. 30, 2022.

Instead, donors will be screened regardless of gender or sexuality, for high-risk sexual behaviours.

“Under the new screening approach, Canadian Blood Services will introduce a sexual behaviour-based donor-screening questionnaire that will apply to all donors of blood and plasma,” Health Canada said.

“Today’s authorization is a significant milestone toward a more inclusive blood donation system nationwide, and builds on progress in scientific evidence made in recent years.”

Over the last decade, Health Canada said it’s OK’d several changes to the donor deferral period for men who have sex with men, from a lifetime restriction to five years in 2013, to one year in 2016 and to three months in 2019.

Under federal regulations, Canada’s two blood operators — Canadian Blood Services and Héma-Québec — are required to make submissions to Health Canada for any changes to their processes, such as changes to donor deferrals, the regulator said.

The changes, once implemented, will bring an end to men being asked during the pre-donation screening process if they’ve had sex with another man, Canadian Blood Services said in a statement.

Now, the new criteria will ask all donors, regardless of gender or sexual orientation, if they’ve had new or multiple sexual partners in the last three months.

3:54
A look at Canada’s ban on blood donation from gay men and what’s next

Canadian Blood Services added it will spend the next few months preparing to implement the new criteria, including system and process updates, as well as “robust training” for employees.

Héma-Québec, Canada’s blood operator in the province, told Global News it is pursuing a “two-step” approach to make donations more inclusive for men who have sex with men.

“The first step will be implemented next fall for plasma donations. It will then be expanded in the spring of 2023 for blood and platelet donations,” a spokesperson said.

“What will change in the fall of 2022: Héma-Québec will abandon the current three-month temporary deferral period for men who have had sex with men for plasma donations. Eligibility to donate plasma will be based on an individualized assessment of risk behaviours, rather than on the person’s membership in a group considered at risk.”

“It is frustrating that it took this long,” he said.

“Implementation should be done by the fall, hopefully, but this is good news for all Canadians. Our blood supply will continue to be safe and we’re doing away with a discriminatory blanket ban.”

“It’s about time,” he told Global News from Edmonton. “It still shocks me in 2022 that as a gay male, I actually can’t donate blood.”

Tyler Watt, registered nurse and Ontario Liberal Party candidate for the riding of Nepean, ON, has been fighting to lift the blood ban for years, he told Global News.

“HIV is not a gay disease, we know that,” he said. “To remove this part that was discriminatory towards men who have sex with men, gay men and bisexuals, it’s a step in the right direction for the LGBTQ2S+ people in this country.”

As a member of the LGBTQ2S+ community, Watt said he has been wanting to donate blood for as long as he can remember.

“We’ve been fighting so long to have this happen, to be treated like everyone else in this country,” he said. “We are a part of this community and we know how important it is to help with our blood supplies.”

Oilers defeat Kings 2-0, advance to next round of playoffs