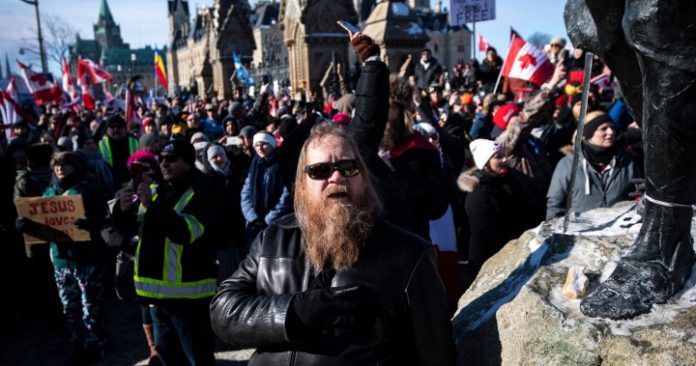 As another convoy rolls toward Ottawa, Canada’s public safety minister says the country’s intelligence agency has learned lessons from the weeks-long blockade of the capital earlier this year.

Public Safety Minister Marco Mendicino committed Wednesday the federal government was ready to offer “whatever tools and resources” necessary to Ottawa police to avoid a repeat of February’s convoy protests, which police have previously described as an “occupation.”

While the so-called Freedom Convoy organizers and supporters were upfront with their intentions, the protest-turned-encampment in late January and February appeared to catch the Ottawa Police Service off guard.

The demonstration – along with blockades at key Canada-U.S. border crossings – eventually led to the federal government implementing unprecedented emergency powers to bring the protests to an end.

Another demonstration, dubbed the “Rolling Thunder Convoy,” is planned for the nation’s capital this weekend, and Ottawa’s interim police chief said Tuesday he has “no intention” of allowing it to turn into another blockade.

“It was an unprecedented emergency situation. There were many blockades at the border that caused a lot of disruption to trade and even to the movement of people between both countries, so it was very, very difficult. Here in Ottawa, businesses were closed,” Mendicino said.

Mendicino also defended the use of the Emergencies Act to clear the protest, suggesting “the advice that we had received from police forces was that the powers that existed at the time were not sufficient to restore public safety.”

Speaking before a joint House of Commons and Senate committee Tuesday evening, CSIS Director David Vigenault said the agency was not “surprised” by the convoy protests and the alleged extremist elements that participated in them.

“We are constantly looking at the movement of ideologically-motivated violent extremists, so we have a fairly good understanding of the dynamics at play … I would not say that we were surprised,” Vigneault told parliamentarians.

“We also saw in the past number of these elements who are trying to use protest and demonstrations to infiltrate and take advantage, to engage in activity that can meet the threshold of CSIS to be a threat of terrorism.”

Vigneault confirmed Tuesday that the agency now devotes roughly 50 per cent of its attention and resources to “ideologically-motivated extremist violence.”

The joint House of Commons and Senate committee is one of two main bodies probing the Liberal government’s invocation of emergency powers to clear the convoy protests that ground downtown Ottawa to a halt and blockaded major border crossings with the U.S.

In justifying their recourse to the Emergencies Act, Prime Minister Justin Trudeau and his cabinet referred to the economic damage the border protests were wreaking, along with the disruption to not only the people who live in downtown Ottawa, but the affairs of Parliament.

Global News reported Monday the economic toll of the protests may have been exaggerated. According to Global’s analysis, cross-border trade in Ontario and Alberta – the two provinces with the most high-profile border blockades – was actually up 16 per cent with the U.S. in February.

At the same time, political pressure on both sides of the border – including from the Biden administration and individual American lawmakers – was obvious during the protests. Trade found a way in the short term, but the blockades were not without at least a political cost.

“Yes, we were concerned at the time, and my concerns are ongoing,” Mendicino told the parliamentary committee Tuesday evening, regarding the economic impact of the blockades.

The Liberals announced on Monday that an Ontario appeals court judge, Paul S. Rouleau, will lead an independent public inquiry into the circumstances leading up to their use of emergency powers and the use of those exceptional powers.

Under the Emergencies Act declaration, the Liberals gave police the ability to freeze some bank accounts related to convoy funding, declare zones across the country unlawful for legitimate protest, and ultimately precipitated the police crackdown that evicted the entrenched Ottawa protest.

Share
Facebook
Twitter
Linkedin
Pinterest
WhatsApp
Telegram
Copy URL
Previous articleSaving for a down payment? Here’s a look at the accounts that can help you – National
Next articleModerna seeks U.S. approval for COVID-19 shots for children under 6
RELATED ARTICLES
Politics

Pride event in Hamilton to be indoors with police presence, 3 years after violence in Gage Park