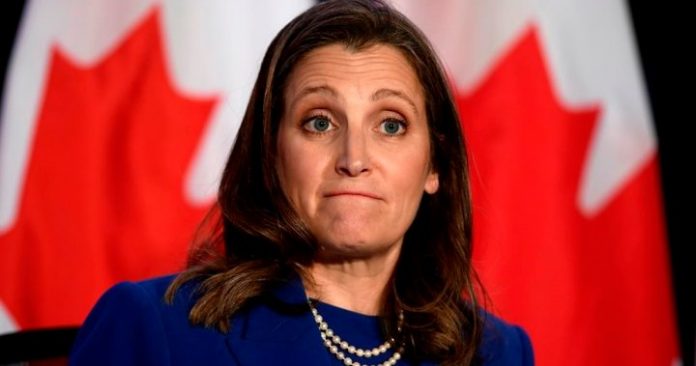 The Liberal government is insisting that the goal of an upcoming federal spending review is not to slash social programs, while gender-equality advocates want to make sure it is done with women and marginalized people in mind.

The federal government’s latest budget released earlier this month announced the launch of a spending review of its programs and policies.

The review is meant to find savings of $6 billion over five years and $3 billion annually by 2026.

“The parameters of the review process will be developed over the coming months, however, the government has no intention of cutting existing social programs,” said Jessica Eritou, spokesperson for the office of Finance Minister Chrystia Freeland.

It makes sense for the government to review spending in order to fine-tune programs and improve outcomes, said Katherine Scott, senior economist at the Canadian Centre for Policy Alternatives.

While a review does not automatically mean a shift to austerity measures, Scott said that has been the result when some prior governments launched the same type of process.

To reduce the deficit, the Jean Chretien-led Liberal government held a spending review from 1994 to 1997 that resulted in scaled-back spending on social programs and transfers to the provinces and territories.

Those cuts disproportionately affected women, especially those already most vulnerable, according to an analysis by the Canadian Feminist Alliance for International Action.

“They paid the price,” Scott said.

The government’s revenue base was reduced and public services shrank as women dealt with the effects of the recession in 1990.

As the incomes of households shrank, tasks were off-loaded onto families and taken on by women in unpaid labour, said Scott.

Services were cut back at the same time, leading to women performing unpaid care of the young and old, as well as people who were ill or had disabilities, according to the alliance’s report.

About 26,000 employees were cut from the public service and programs were either trimmed or starved of funding.

“Not a lot got done under the Harper years, in terms of programs and services. It was a bunch of dead years. We didn’t really invest too much on very many policy aims,” Shepherd said.

These past instances can teach us how to think about this one, said Scott.

“What is the spirit motivating it? How is the government rethinking its support? And who pays the price?” she asked.

Martha Jackman, steering committee member for the National Association of Women and the Law, said the federal government must recognize that it is required to do a review that complies with women’s equality rights guaranteed in the Charter of Rights and Freedoms.

“The Canadian Charter guarantees the right to equal protection and benefit of all government action, including spending,” said Jackman, who is also a professor of constitutional law at the University of Ottawa.

Shepherd said he is concerned the federal government will do the review without collaborating with the provinces and territories, an approach that increases the likelihood of negatively affecting vulnerable groups.

Women and marginalized communities have less input in that scenario, because they are more removed from the process in the absence of provincial and territorial involvement, he said.

Sahir Khan, executive vice-president of the University of Ottawa’s Institute of Fiscal Studies and Democracy, said reviews don’t necessarily have to be about cuts.

“Reviews at their core are really about the quality of spend, improving efficiency, but largely for the sake of better outcomes too,” said Khan.

“I think the government has every opportunity to look at intersectional dimensions of its programming and do better after the review than it did going in.”

Part of the spending review will assess how effective programs are in meeting priorities of inclusiveness, economic growth and climate change, the budget said.

Kate Bezanson, a gender and social policy expert at Brock University, said she is not surprised the government said cuts to social programs are off the table, given that inclusiveness is a criterion driving the review.

“Well, that’s a signal. Often the biggest policy levers for inclusiveness are around entitlements and those kinds of social policy supports,” Bezanson said.

2:22
No ‘silver bullet’ when it comes to fixing Canada’s housing crisis, Freeland says

While Women and Gender Equality Minister Marci Ien said she was unable to comment on what the review will entail, she did note the budget “definitely has a fiscal anchor.”

“We are in tough times,” said Ien in an interview, pointing to global inflationary rates not seen in decades.

Prime Minister Justin Trudeau came to power in 2015 on a promise to run three years of what he called “modest deficits” of $10 billion. He exceeded those levels sometimes by double the amount, well before the COVID-19 pandemic’s arrival in Canada.

While Jackman said she’s pleased the government clarified that the review is not designed to be simply a cost-cutting exercise, looking only at expenditures and not revenues will fail to produce the needed savings and efficiencies for public resources.

She described an anti-tax attitude in Canadian politics that has set in since the 1990s.

“There’s the idea that somehow when the government taxes, it’s stealing hard-earned money out of the pockets of Canadians without acknowledging that it is actually a very effective way to deliver collective goods,” she said.

Bezanson said while she’s heartened by how the government has framed the review, the last few years have shown how hard it is to predict what lies ahead.

“We live in such uncertain times, and my hope is that we can proceed on that basis,” she said.

“The economic and political winds are so unsettled.”

How much should I spend on my mortgage?

Gas prices: How to save money during road trips