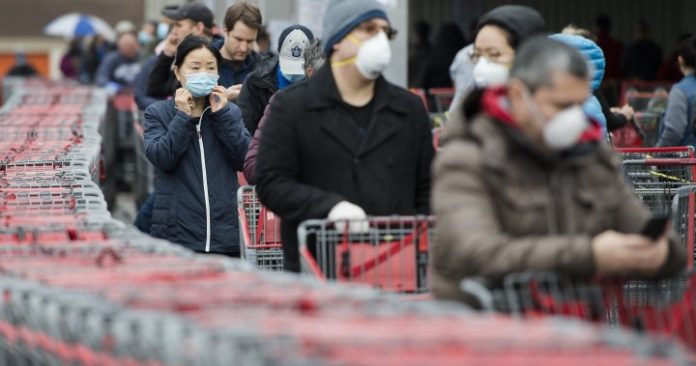 Canadians are spending 30 per cent more than they were before the COVID-19 pandemic began over two years ago, a new report says, despite rising costs driven by inflation.

The latest Consumer Spending Tracker from the Royal Bank of Canada found pent-up demand for goods and services are continuing to drive up household spending, as more Canadians take advantage of eased public health restrictions.

“As far as the economy reopens, we are seeing people capitalize on these new opportunities to spend, to go out and to travel.”

Both numbers are the highest since spending first surpassed pre-COVID-19 levels in January 2021, and are double the rate measured this past January.

The report comes shortly after Statistics Canada found the annual rate of inflation hit 6.7 per cent in March, the fastest year-over-year increase in the consumer price index in over 31 years.

Grocery store prices rose 8.7 per cent year-over-year, the fastest annual rate since March 2009, aided by the largest annual increase in dairy and egg prices since February 1983.

Yet the RBC report found Canadians’ appetites for buying groceries and dining out has only gone up this month.

2:41
How to save at the grocery store amid rising food prices

How to save at the grocery store amid rising food prices

“Food prices are something we continue to watch … but we have yet to see any attrition in spending that can be tied to that,” Billy-Ochieng said.

Travel spending is also continuing to rise after surpassing pre-pandemic levels for the first time last month, the report found.

Billy-Ochieng says the increased spending is putting pressure on supply chains that are struggling to keep up with the pent-up demand.

That, coupled with rising interest rates and continued impacts of Russia’s war in Ukraine on the global economy, will soon lead to a cooling-off period — but it’s unclear when that will happen.

Bank of Canada head won’t ‘rule anything out’ to tame inflation, including more rate hikes

“Certainly as the Bank of Canada continues to raise interest rates, we’re definitely anticipating that we’re going to see a slowdown in terms of the actual appetite to spend,” Billy-Ochieng said.

Bank of Canada governor Tiff Macklem told reporters Thursday he wouldn’t rule out pushing rates beyond 50 basis points all in one sitting — after moving to lift rates by that amount to one per cent just last week — but said he “is prepared to be as forceful as needed” to try and curb inflation.

Andrew Kelvin, strategist at TD Securities, said in an interview that he believes the central bank could lift rates by more than 50 basis points if “there is little to no slack left in the economy.” But he and other economists added the 50-point threshold will likely remain.

Macklem has pinned the increased consumer spending on a robust jobs market — unemployment is now below pre-pandemic levels — and admitted the bank didn’t expect the economy to bounce back quite as quickly as it has.