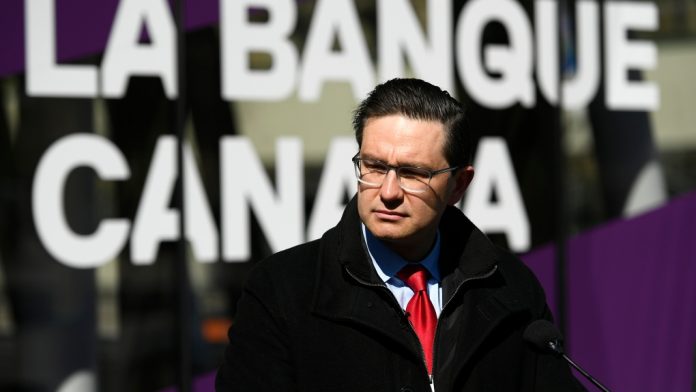 
Conservative leadership candidate Pierre Poilievre took his campaign against Canada’s central bank to its doors Thursday, vowing to have it audited and to bar it from using its own digital currency.


The Ottawa-area MP unveiled his policies for the Bank of Canada, standing in front of its museum in the national capital.


He was joined by former Conservative leader and Saskatchewan MP Andrew Scheer, who Poilievre said was the one to propose the idea of auditing the central bank in a bill Poilievre now pledges to adopt.


Scheer is among 51 Conservative MPs — the largest amount to back any leadership contender — to endorse Poilievre, who has long raised concerns about Canada’s inflation rate.


Poilievre touted that history on Thursday when he announced he wouldn’t allow a digital currency from the Bank of Canada to enter the country’s retail banking system.


Throughout the COVID-19 pandemic, Poilievre repeatedly criticized the central bank for statements its governor and other officials have made about the country’s risk of seeing inflation rise.


While Poilievre lays the blame squarely on the Trudeau government’s spending, financial experts say Russia’s invasion of Ukraine is the predominant driver of oil prices. They also point to pandemic-related supply chain issues as another factor.


For more than a year, Poilievre has aired his Bank of Canada criticisms on social media, including in a recent tweet where he called the institution “financially illiterate.”


He defended his targeting of the central bank Thursday, saying Canadians are suffering under the higher cost of goods.


“If you think I’m going to be silent about that to protect the ego of bankers and politicians, then you’re in for a surprise,” Poilievre told reporters.


Bruce MacLellan, CEO of Proof Strategies, which surveys Canadians’ trust levels, said 2022 will be an important year for the central bank’s credibility as people watch to see how it handles inflation by managing interest rates, which it recently hiked.


“It’s sort of like the fire department has been called out and now people are going to decide how well they do,” he said Thursday.


“We can have an inflation fire in Canada, so now the Bank of Canada has to demonstrate that it can be a good fire department when needed.”


However, MacLellan said, Poilievre’s campaign against the institution reflects how he’s trying to win the Conservative leadership race through delivering a populist message, which includes attacking Ottawa-based institutions.


He said his organization’s survey showed that trust in the Bank of Canada this year ranked the highest in Quebec and lowest in the Prairies. The Conservative grassroots call Western Canada home.


MacLellan said while he believes Poilievre’s message is aimed at those in the Prairies and rural areas, he questions whether campaigning against the central bank would resonate with Canadians more broadly. His group’s data shows trust in the institution to be generally stable.

Travel delays: Conservatives want to do away with restrictions