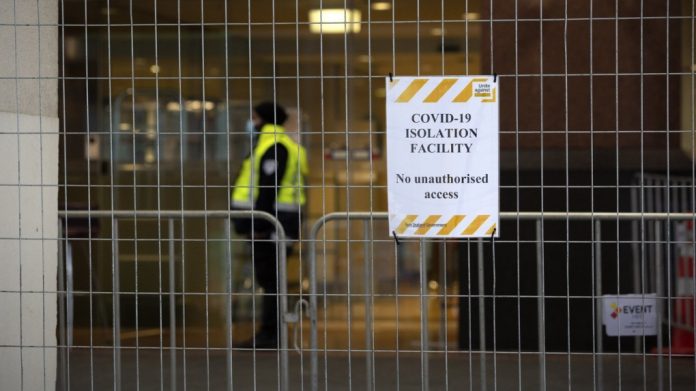 
During the height of pandemic restrictions, thousands of New Zealanders desperate to return home essentially had to roll the dice month after month as they tried to secure a coveted bed in a quarantine hotel run by the military.


On Wednesday, a New Zealand court ruled that the government had breached the rights of its own citizens by imposing the lottery-style system on them.


A group called Grounded Kiwis had used crowdsourcing to help fund their case against the government.


But while they were celebrating their victory, the case may have little impact going forward as New Zealand has since abandoned its zero-tolerance approach to the virus and largely dismantled its contentious quarantine system.


Central to the case was New Zealand’s Bill of Rights Act, which guarantees every citizen the right to return home.


High Court Justice Jillian Mallon ruled that forcing people to stay in quarantine hotels for two weeks initially, and later for one week, was reasonable given the circumstances of the pandemic.


But she found that operating a lottery-style system for the beds was unreasonable, and did not take into account how long people had been waiting abroad, or whether they had a compelling need to return home.


“New Zealanders’ right to enter their country could be infringed in some instances in a manner that was not demonstrably justified in a free and democratic society,” the judge concluded.


The flaws in the system were highlighted earlier this year by the case of Charlotte Bellis, a pregnant New Zealand journalist who was temporarily stranded in Afghanistan due to New Zealand’s strict border policies.


The case quickly became an embarrassment to the New Zealand government, which backed down and offered Bellis a pathway home, which she accepted.


Paul Radich, a lawyer representing Grounded Kiwis, said he was “delighted” with the decision, which came as vindication for people who had faced huge difficulties returning home.


“We now have judicial confirmation of state-sponsored cruelty that was the MIQ lottery,” Bishop said.


“Pregnant women like journalist Charlotte Bellis were denied MIQ vouchers to enter New Zealand,” Bishop said. “People couldn’t return to be with loved ones in the final stages of their lives.”


But COVID-19 Response Minister Chris Hipkins said the court had confirmed that the MIQ system was lawful and justified. He said he acknowledged the court found that the rights of some citizens may have been breached by the lottery-type system for beds.


“We have long acknowledged the difficult trade-offs we’ve had to make in our COVID-19 response to save lives and the effects of those decisions on all New Zealanders, particularly those living abroad,” Hipkins said.


The court case specifically examined the so-called virtual lobby system, which was essentially a government-run lottery for quarantine spots, as it operated between early September and mid-December 2021.


New Zealand’s approach to the pandemic has changed markedly over time, which this year has led to the quarantine system being dismantled.


Until last October, the nation of 5 million pursued a zero-tolerance approach as the government led by Prime Minister Jacinda Ardern tried to eliminate the virus completely.


What questions do you have about Omicron?


With the emergence of a new COVID-19 variant of concern, labelled Omicron, CTVNews.ca wants to hear from Canadians with any questions.


Tell us what you’d like to know when it comes to the Omicron COVID-19 variant.


To submit your question, email us at dotcom@bellmedia.ca with your name, location and question. Your comments may be used in a CTVNews.ca story.

This new underwater camera is powered by sound