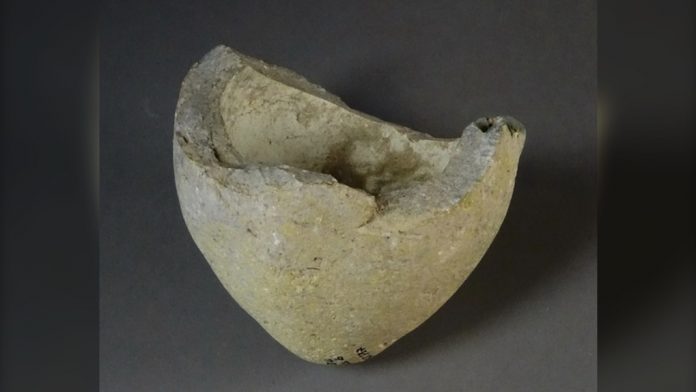 Researchers believe they may have found an early type of hand grenade potentially used in the Crusades after performing new analysis on the residue inside a set of 11th century ceramic vessels found in Israel.


These containers, which are conical with rounder bodies, were found with pieces missing when they were first excavated from the Armenian Gardens in Jerusalem between 1961 and 1967.


According to the new study, published Monday in the journal PLOS One, the sherds used in this research had been catalogued in the Royal Ontario Museum collection, which gave permission for them to be re-analyzed.


Analysis on these type of ceramic vessels has been done several times before. The type of vessel up for reexamination in this study were believed to have contained a variety of things, such as mercury, oils and medicines, or may have been used as drinking vessels for beer.


Some of what researchers found in this fresh analysis lined up with previous research, with evidence of scented oils and medicines found in three of the four vessels. Some of the vessels were also sealed with resin.


But one vessel contained something that merited a closer look: evidence of a flammable and likely explosive material. Researchers believe that this could be evidence that the vessels that contained this explosive substance could’ve been used as an early form of hand grenade.


A variety of chemicals, oils and fats were found in the vessel, including sulphur, mercury and potassium nitrate, which are known to have been used in other ancient explosive mixtures.


But while there are other potential explanations for the combination of chemicals making up the residue, such as the container having held fuel for weapons or lamps or alchemical substances, researchers believe that the evidence points more towards a hand grenade.


Unlike the others, this vessel was undecorated and had thick walls that “would provide the containment and strength to withstand the build-up of pressure prior to detonation, which is required for an explosive weapon,” the study stated.


It may sound unlikely, but the use of hand grenades would actually line up with some eyewitness reports from those ancient clashes.


“This research has shown the diverse use of these unique ceramic vessels which include ancient explosive devices,” Carney Matheson, associate professor at Griffith University in PLACE and author of the study, said in a press release. “These vessels have been reported during the time of the Crusades as grenades thrown against Crusader strongholds producing loud noises and bright flashes of light.”


In the early 11th century, during the First Crusade, Crusaders laid siege to Jerusalem for around a month before they breached the city, massacring countless Muslim and Jewish citizens.


Previous research surrounding the Crusades themselves has suggested that Crusaders may have indeed used hand grenades, but the prevailing theory was that they might have used a substance called “black powder” to achieve this. This was an explosive invented in ancient China, and has been found to have existed in the Middle East by the 13th century.


“It has been proposed that black powder may have been introduced to the Middle East earlier, as early as these vessels from the 9th-11th century,” Matheson said. “However, this research has shown that it is not black powder and likely a locally invented explosive material.”


Researchers pointed out that the undecorated vessel with thicker walls is a style that did not exist in the Middle East before the 9th century or after the 15th century, implying a fixed usage for them, potentially as a tool of war.


“More research on these vessels and their explosive content will allow us to understand ancient explosive technology of the medieval period, and the history of explosive weapons in the Eastern Mediterranean,” Matheson said.

B.C. Premier Horgan will ‘leave it to Soccer Canada’ to explain decision to host Iran

Europe’s space agency needs your eyeballs to study a comet