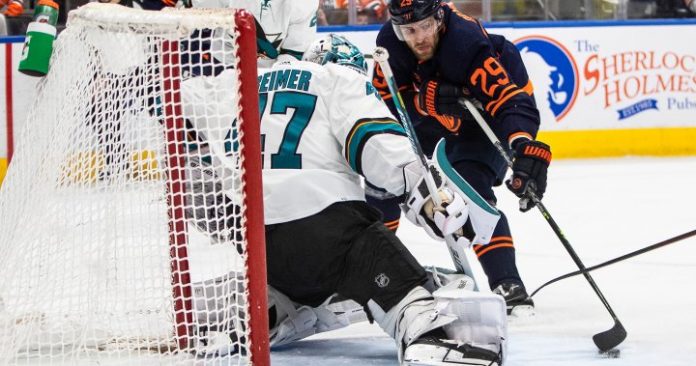 Zach Hyman scored in overtime as the Edmonton Oilers came from behind to outlast the San Jose Sharks 5-4 Thursday night at Rogers Place.

The Sharks went ahead on two quick goals by Noah Gregor. Shortly after Mikko Koskinen threw the puck away into the corner, Gregor beat the Oilers goalie with a wrister from the slot.

The Oilers broke through in the second when Ryan McLeod fired in a power-play rebound for his ninth goal of the season.

Scott Reedy replied with a deft deflection on the power play to make it 3-2 Sharks after two.

Excitement in downtown Edmonton as Oilers head to playoffs

Nick Bonino restored the Sharks’ lead 1:05 later. Only 1:05 after that, Oilers captain Connor McDavid set up Philip Broberg in the high slot. Broberg ripped in his first NHL goal to make it 4-4.

Reimer stopped McDavid on a breakaway about a minute in overtime. With 3:23 to go, Ryan Nugent-Hopkins set up Hyman for a one-timer to end the game.

The Oilers (48-27-6) will host Vancouver on Friday to conclude the team’s regular season. You can listen to the game live on 630 CHED beginning with The Faceoff Show at 5:30 p.m. The actual game starts at 7 p.m.

Buffalo supermarket shooting: What do we know so far?