Florida sheriff: Shoot if someone’s breaking into your home 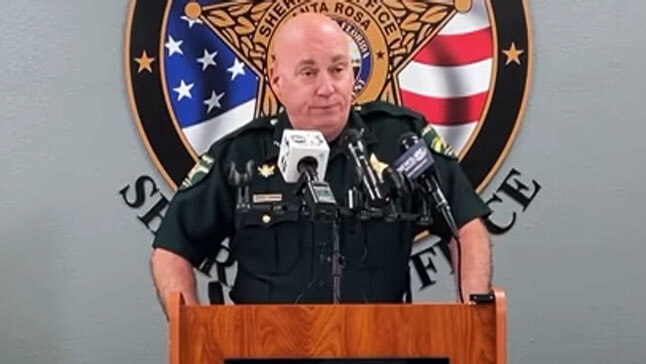 
A Florida sheriff invited a homeowner who shot at a would-be robber to attend a gun safety course to “learn to shoot a lot better” and “save the taxpayers money.”


Santa Rosa County Sheriff Bob Johnson made the comments during a news conference last Thursday regarding the arrest of a 32-year-old man who was breaking into houses in Pace, which is near Pensacola in Florida’s Panhandle.


Multiple residents called 911 last Wednesday to report the break-ins and deputies quickly set up a perimeter, Johnson said. The suspect was jumping over fences and breaking into homes as deputies tried to catch him.


“We don’t know which homeowner shot at him. I guess they think that they did something wrong, which they did not,” Johnson said. “If someone is breaking into your house you’re more than welcome to shoot at them in Santa Rosa County. We’d prefer that you do actually.”


He added that the sheriff’s office conducts a gun safety course every other Saturday.


“If you take that you’ll shoot a lot better and hopefully you’ll save the taxpayers money,” he added.


After the man was shot at, deputies eventually caught up to him, already inside another home. As they broke through a door he was trying to block, the man went head-first through a window to escape, cutting himself on the glass.


The man has a record stretching back to when he was 13, Johnson said. He had spent more than six years in prison and had active felony warrants for his arrest at the time of his capture. He is being held on a US$157,500 bond, and faces multiple charges, records show.


“He just can’t seem to get the picture that crime does not pay,” the sheriff said.