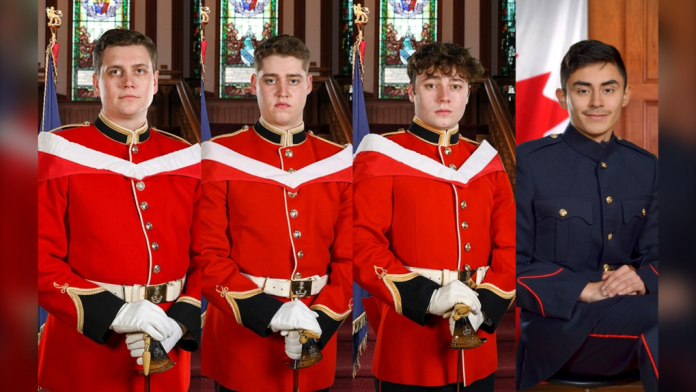 Four cadets at the Royal Military College in Kingston, Ont. set to graduate this spring have been killed in an incident involving a motor vehicle.


Emergency crews responded to an incident at approximately 2 a.m. Friday at Point Frederick on the RMC campus.


“It is with great sadness that I confirm the devastating loss of four of our officer cadets,” Commodore Josée Kurtz, RMC Commandant, said.


“These four amazing young adults were fourth year students and were set to graduate with their university degree and commission of officers of the Canadian Armed Forces.”


The four victims have been identified as:


Emergency vehicles were still at Point Frederick on Friday afternoon.  A crane removed a green vehicle from the water shortly after 4 p.m.


“As you can appreciate, the entire RMC community is devastated by this tragic loss,” Commodore Kurtz said.


Kurtz said the Canadian Forces National Investigation Service is currently investigating, with assistance from the Kingston Police Force. Kurtz would not say whether a military vehicle was involved in the crash, and wouldn’t speculate on the cause of the crash.


Earlier in the afternoon, CTV News Ottawa cameras spotted officials placing a body on a stretcher into a van as military police watched.


“A this time, RMC’s priority is to ensure our naval and officer cadets, our staff and our facility and our families are cared for and are supported. The RMC community is a close-knit community and we’re rallying behind each other on and off campus,” Kurtz said.


DND said earlier Friday there was a fatal incident involving a vehicle.


“RMC’s first priority is to ensure our Naval and Officer Cadets, staff, faculty, and families are cared for and supported,” DND said in a statement to CTV News.


“This loss is felt across the RMC community and we extend our deepest condolences to all our members, their families, and their friends during this difficult time.”


Kingston Mayor Bryan Paterson released a statement on the deaths of the four cadets at RMC.


“As a member of the RMC community I am absolutely heartbroken to hear of the tragic loss of 4 officer cadets early this morning,” Paterson said on Twitter.


“As Mayor of Kingston I want to express my sincere condolences to their families, friends & everyone at RMC. We stand with you & offer our full support.”


Prime Minister Justin Trudeau extended condolences to the families and friends of the four cadets in the incident.


“My heart breaks for the families and friends of the four cadet officers who lost their lives early this morning in Kingston,” Trudeau said in a statement on Twitter late Friday afternoon.


“The tragic passing of these young Canadians is a devastating loss. To all who knew them: We’re here for you.”


Premier Doug Ford said, “On behalf of all Ontarians, I extend my deepest condolences to the family and friends of the young cadets who tragically lost their lives in Kingston today. Our thoughts and prayers are with you all.”


Conservative Party leader Candice Bergen said, “My thoughts go out to the family, friends and colleagues of the RMC cadets. I pray for all of those who were affected by this tragedy.”


Point Frederick is a peninsula where Lake Ontario meets the St. Lawrence River.

Is Canada too ‘smug’ about abortion? These doulas say access is worse than you think