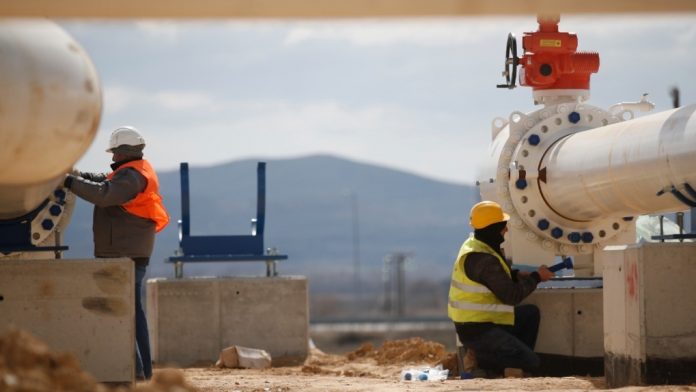 
Mountainous and remote, the Greek-Bulgaria border once formed the southern corner of the Iron Curtain. Today, it’s where the European Union is redrawing the region’s energy map to ease its heavy reliance on Russian natural gas.


A new pipeline — built during the COVID-19 pandemic, tested and due to start commercial operation in June — would ensure that large volumes of gas flow between the two countries in both directions to generate electricity, fuel industry and heat homes.


The energy link takes on greater importance following Moscow’s decision this week to cut off natural gas supplies to Poland and Bulgaria over a demand for payments in rubles stemming from Western sanctions over the war of Ukraine.


The 180-kilometre (110-mile) pipeline project is the first of several planned gas interconnectors that would give eastern European Union members and countries hoping to join the 27-nation bloc access to the global gas market.


The new pipeline connection, called the Gas Interconnector Greece-Bulgaria, will give the country access to ports in neighbouring Greece that are importing liquefied natural gas, or LNG, and also will bring gas from Azerbaijan through a new pipeline system that ends in Italy.


It’s one of many efforts as EU members scramble to edit their energy mixes, with some reverting back to emissions-heavy coal while also planning expanded output from renewables.


The European Union wants to reduce its dependence on Russian oil and gas by two-thirds this year and to eliminate it completely over five years through alternative sources, the use of wind and solar power, and conservation.


Russia’s invasion of Ukraine is likely to accelerate changes in the EU’s long-term strategy as the bloc adapts to energy that is more expensive but also more integrated among member nations, said Simone Tagliapietra, an energy expert at the Brussels-based think tank Bruegel.


“It’s a new world,” he said. “And in this new world, it’s clear that Russia doesn’t want to be part of an international order as we think of it.”


Tagliapietra added: “The strategy — particularly by Germany — over the last 50 years was always one of engaging with Russia on energy. … But given what we are seeing in Ukraine and given Russia’s view of international relations, it’s not the kind of country with which we would like to do business.”


EU policymakers argue that while Eastern European members are among the most dependent on Russian gas, the size of their markets makes the problem manageable. Bulgaria imported 90% of its gas from Russia but only consumes 3 billion cubic meters annually — 30 times less than lead consumer Germany, according to 2020 data from EU statistics agency Eurostat.


The Greece-Bulgaria pipeline will complement the existing European network, much of which dates to the Soviet era, when Moscow sought badly needed funds for its faltering economy and Western suppliers to help build its pipelines.


The link will run between the northeastern Greek city of Komotini and Stara Zagora, in central Bulgaria, and will give Bulgaria and neighbors with new grid connections access to the expanding global gas market.


That includes a connection with the newly built Trans Adriatic Pipeline, which carries gas from Azerbaijan, and suppliers of liquefied natural gas that arrives by ship, likely to include Qatar, Algeria and the United States.


As many as eight additional interconnectors could be built in Eastern Europe, reaching as far as Ukraine and Austria.


The 240 million-euro (US$250 million) pipeline will carry 3 billion cubic metrws of gas per year, with an option to be expanded to 5 billion. It received funding from Bulgaria, Greece and the EU, and has strong political support from Brussels and the United States.


On the ground, the project faced multiple holdups because of supply chain snags during the COVID-19 pandemic.


Construction of the pipeline finished in early April, he said, while work and testing at two metering stations and software installation are in the final stages.


“We had a sequence in mind. But the fact that some materials did not arrive made us rework that sequence, sometimes with a cost effect,” Mitzalis said.


“Bulgaria and Greece will continue to work together for energy security and diversification — of strategic importance for both countries and the region,” Petkov later tweeted. “We both are confident for the successful completion of the IGB on time.”

After years of declines, numbers of wintering monarch butterflies rise by 35% in Mexico