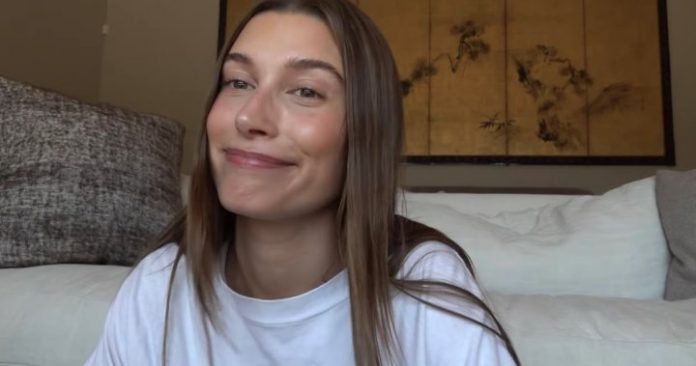 Hailey Bieber has opened up publicly about her recent health scare, which she called the “scariest moment of my life.”

In a YouTube video posted to her channel on Wednesday, Bieber, 25, discussed the reason for her widely reported hospitalization in March.

The video, titled “telling my story,” discussed the initial symptoms, diagnosis and details of Bieber’s health condition. She explained that she experienced stroke-like symptoms from a blood clot that travelled from a hole in her heart to her brain.

“I had a very scary experience on March 10,” Bieber said in the video.

She went on to reveal that she experienced a transient ischemic attack (TIA), often referred to as a “mini-stroke.”

By the numbers — Jeopardy! champion Mattea Roach and her rise to TV stardom

Bieber said while eating breakfast with her husband, Justin Bieber, she started experiencing a “really weird sensation that travelled down my arm from my shoulder, all the way down to my fingertips.” Bieber said her fingertips felt “numb and weird.”

“I couldn’t speak,” she said. “The right side of my face started drooping. I couldn’t get a sentence out.”

Bieber said she and her husband thought she was having a “full-blown stroke.”

In the video, she said she was swiftly provided medical attention and brought to the hospital. By the time she arrived at the emergency room, she said her symptoms had subsided and she scored a zero on a medical stroke checklist.

“So basically, they did some scans and they were able to see I had suffered a small blood clot to my brain, which they labelled and categorized as something called a TIA,” Bieber said.

According to Mayo Clinic, TIA is “a temporary period of symptoms similar to those of a stroke. A TIA usually lasts only a few minutes and doesn’t cause permanent damage.” A TIA can serve as a warning of a future stroke.

“It definitely feels like having a stroke, except my body was able to resolve it pretty quickly and then I didn’t have any more issues,” she said.

While she did not have any permanent issues, Bieber said in her video that scans showed there was a lack of oxygen to “part of my brain for a certain amount of time.”

Doctors performed a bubble echo on Bieber — according to Harvard, a procedure by which “a technician uses a probe that emits high-frequency sound waves (ultrasound) that ‘echo’ off the structures of your heart” — to search for a patent foramen ovale (PFO).

The Mayo Clinic writes a PFO is “a hole in the heart that didn’t close the way it should after birth.”

Though they did not find a PFO in Bieber, she later went to the University of California, Los Angeles to see other doctors.

In the video, Bieber said her doctors concluded the blood clot in her brain was caused by “a perfect storm” of factors, namely birth control pills, a recent case of COVID-19 and two flights to Paris from Los Angeles in a short time frame.

At UCLA, Bieber also underwent a transcranial doppler, which John Hopkins Medicine describes as “a non-invasive, painless ultrasound technique that uses high-frequency sound waves to measure the rate and direction of blood flow inside vessels.”

Bieber claimed this test identified a Grade 5 PFO, the highest grade a person can have.

In her video, she relayed what doctors told her and said, “My blood clot actually escaped through the flap, or hole, in my heart and travelled to my brain, and that is why I suffered a TIA.”

To remedy the issue, Bieber had a PFO closure procedure done, where a medical device is inserted into the heart to close the hole.

“I felt like it was important for me to share this and because it already was kind of a public situation.”

In the description of Bieber’s video — which as of Thursday afternoon has more than 2.4 million views — she writes, “Thank you all for watching and listening to my story. I feel very grateful and lucky to have had the resources and family support to be able to deal with this as quickly as I did.”

“I wanted to make this video to share more info and a few resources below to turn to if you have gone or are going through something similar.” She added several links and resources in reference to stroke warnings and symptoms.

According to the government of Canada, about 741,800 Canadian adults aged 20-plus live with the effects of a stroke.

Killer who stabbed family was charged with stalking, sexual assault days before attack