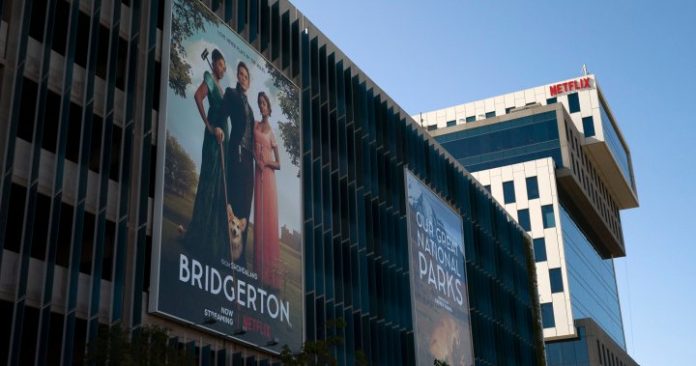 Netflix’s share value plummeted this week on the news that the streaming platform lost roughly 200,000 subscribers in the last quarter.

The Los Gatos, Calif., company also told investors to expect deeper losses in the months ahead, signalling that the days of unlimited growth for the streaming pioneer might be over.

It’s a far cry from two years ago, when lockdowns tied to the COVID-19 pandemic were forcing consumers indoors with little else to do than watch Netflix.

Now, not only is the global economy reopening to consumers eager to take in concerts and activities outside the home, but the streaming landscape has filled up with competitors launching or expanding their offerings to take more of the pie from Netflix.

The company showed in a letter to shareholders this week that while its share of the overall streaming market grew over the past year, so too has the amount taken up by Disney+, Amazon Prime, and assorted other on-demand platforms, including traditional cable giants launching their own collections.

As Netflix sees its subscriber growth dwindle and even start to reverse, Levy says the company has less free rein to jack up its subscription prices to offset revenue losses, lest it risk pushing consumers into the hands of an increasingly tight market.

“It takes a lot less for consumers to drop one service and move to another,” he says. “There is no loyalty among subscribers.”

So what can Netflix do to keep growing its bottom line? Here’s how you might see the platform and its content change in the new reality for streaming.

One of the gaps in the platform that Netflix is looking to address is the proportion of users who are sharing accounts outside their household.

Netflix said this week that in addition to the 222 million households who pay for the service, it estimates there are 100 million more who are bumming an account off a friend or family member. This proportion hasn’t changed much over the past few years, it claims, but Levy says it’s become an issue the company can’t sit on anymore.

“When you are growing by double-digit figures every year, you can ignore a lot of the dirty stuff that’s going on in your own backyard,” he says.

“Now that subscriber growth has stalled, they need to look at the fundamentals of their business and start cleaning up the things that they’ve been ignoring for years.”

Last month, Netflix announced it was testing out new features in three Latin American markets to make users pay for streamers outside their primary residence.

Laura Martin, tech and streaming analyst with Needham & Co., tells Global News that password sharing is a part of the business Netflix might think it can “squeeze out some more revenue” from existing customers rather than add new ones.

“I think that’s one of their answers: get people who already enjoy Netflix to pay more money for it,” she says.

Ads could bring down the cost of a subscription

Martin says that when streaming platforms introduce ad-supported tiers at a lower price point, some two-thirds of subscribers opt to pay less and put up with the commercials.

That’s not necessarily a bad thing when you consider the extra revenue coming in from those ads, she notes.

3:16
Top streaming picks for the month of April

Netflix co-CEO Reed Hastings said for the first time during his company’s earnings call Tuesday that he was “quite open” to putting ads on the platform after years of being staunchly against the idea.

“Allowing consumers who would like to have a lower price and are advertising-tolerant get what they want makes a lot of sense. So that’s something we’re looking at now,” he said.

Though Levy agrees it’s tougher to make a business out of streaming solely on subscriber revenue these days, he thinks some Netflix users might chafe at the idea of seeing ads before watching Stranger Things.

“When your brand was literally built on delivering an ad-free experience to consumers, it’s a pretty big shift to now introduce an ad-based tier into your offerings,” he says.

Levy notes that there will almost certainly always be a version of Netflix that comes ad-free, but that’ll become a privilege for those willing to pay for a premium tier.

The solution and cause of Netflix’s woes could ultimately be one and the same: producing marquee content.

Streaming services’ biggest draw is the content on their platforms, Levy notes, so companies have been spending more and more to create “marquee” shows, movies and documentaries to lure viewers over.

Netflix’s other co-CEO, Ted Sarandos, drove this point home during the earnings call while highlighting the success of Bridgerton’s recent second season and blockbuster movies such as The Adam Project starring Ryan Reynolds.

“We have to have an Adam Project and a Bridgerton every month, and make sure that’s the expectation of the service constantly,” he said.

But Netflix can’t go overboard with its spending. The company is already accelerating its spending on new content to US$17 billion this year, up from nearly US$11 billion a couple years ago, Levy notes.

But as revenue sources dry up, the balance of spending versus growth has never been more precarious for Netflix.

5:18
Toronto cake artist competes on Netflix’s ‘Is It Cake?’

“It has to very carefully thread the needle: spend just enough to keep people coming back for more, but not so much that you know that you compromise your economic position,” Levy says.

There are safer bets in the space, however. Martin points to Disney as having the industry’s “best practice” — locking down franchises such as Star Wars and the Marvel Cinematic Universe and then expanding them.

Once a Marvel or Star Wars fan is hooked, Disney can roll out new properties in that franchise on a weekly basis and space out new programs to start before the next one ends.

This is a model Netflix and other streaming giants in the space are taking note of, and may start to roll out themselves; Amazon’s upcoming Lord of the Rings prequel series is one example.

“That’s a really smart way to run a business around fandoms,” she says.

Much of Netflix’s future growth will have to come from overseas markets, the company noted in its shareholder letter. Levy notes that the North American market has been “largely tapped out” for Netflix, while international markets have “significantly more headroom.”

Three of Netflix’s six most popular series of all time are non-English, according to the company, with last year’s breakout hit Squid Game among the crop. Levy says the Korean-produced series’ success will help to promote a “greater diversity in content going forward.”

International markets can prove not only a reliable source for new content, but also for new subscribers who are keen to see their programming and actors represented on the platform, he says.

The downside to this strategy is the higher costs for Netflix to set up production in new markets.

“The good news is, if you’re a Netflix subscriber, wherever you are, you’re going to see more globally diverse content. The bad news for Netflix is, it’s going to cost them dearly in order to provide that.”

Could gaming be a differentiator for Netflix?

Netflix announced during a growth slump last year that it would look to add gaming to its platform at no extra cost to subscribers. It’s since made a concerted push to buy up gaming studios: the platform closed its acquisition of one studio and announced plans to buy another in the first quarter of 2022.

Levy says it makes “absolute sense” for Netflix to make a push into gaming, fulfilling another entertainment niche for prospective subscribers.

This, too, can be an expensive endeavour that might not pan out if the company’s streaming subscribers aren’t wooed by its gaming offerings.

But Levy says the streaming giant has “no choice but to diversify its offerings.”

What happened to… Blockbuster?

While Netflix has a big market share in streaming, that’s all consumers are getting with their monthly payment. Amazon Prime consumers, meanwhile, are bundling music and e-commerce services alongside their shows and movies, adding more value to the pot.

Beyond that, Martin notes that there’s less pressure on streamers such as Apple and Disney to turn a profit with their platforms, because they’ve got iPhone sales and theme park revenues to offset any losses.

“These guys can sit around and waste money and not do a great job for a decade because it’s subsidized by a sister subsidiary. Netflix doesn’t have a subsidizing partner here,” she says.

While Netflix has made a name for itself as a streaming innovator, it will need to find success in other niches like gaming to stand out in the crowd, Levy says.

“If Netflix relies exclusively on conventional streaming content going forward, movies, television series, things like that, it ultimately is going to fall behind.”