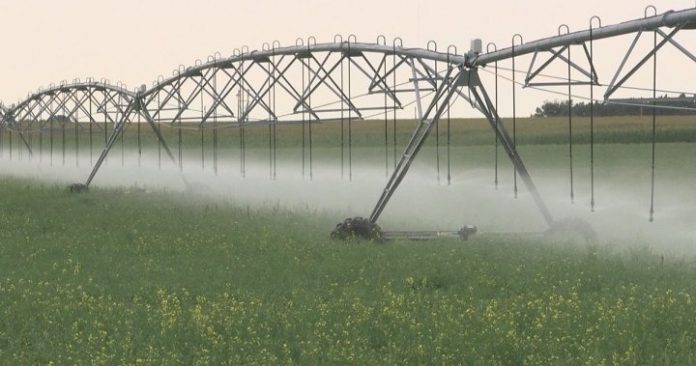 Water issues continued to plague southern Alberta farmers into Tuesday as few details were available as to why or what was happening, but officials later said a resolution had been reached.

Those who rely on the Lethbridge Northern Irrigation District (LNID) to water their crops and animals were worried this blockage, and standoff between the government and the Piikani Nation, could cause detrimental results.

“Is it an issue on the reserve or is it a government issue? We don’t know. So when is it going to be resolved? That’s the scary thing; we don’t know what the issue is and we don’t know when it’s going to get resolved. So where do we go and what do we do?” Troy Bischler, a cattle producer, said.

“We maybe have a week left of water in the dugout… after that, there’s really no Plan B.

“The producers in this area, we’re talking a quarter million head of cattle that need water every day.”

However, in a statement to Global News on Tuesday evening, Stan Grier, chief of the Piikani First Nation, said the nation had met with the province to resolve the issue and that “LNID permit holders will now have access to water for the 2022 irrigation season.”

“I am pleased to report that an agreement has been reached between Piikani Nation and the Government of Alberta regarding the Oldman River project,” the statement read.

“While the terms will not be disclosed, Piikani Council is satisfied with the agreement and want to express appreciation for the efforts put forth in a meeting today.

“We are optimistic that this agreement will assist with advancing reconciliation and foster a closer government-to-government relationship with our shared interests.”

Grier also noted that the province has agreed to meet with the nation on a regular basis to address any issues as they relate to the Lethbridge Northern Headworks.

The lack of information around the topic had farmers worried, especially Bischler who said his cattle usually consume upwards of 20 gallons of water a day, meaning his small reserve wouldn’t last long should the problem persist.

“To feed these animals, it is a non-profit right now. The feed costs are so astronomically high, and now throw a water issue on top of that, I don’t know where we’re at,” he said.

“If it gets settled, that’s great, but for that water to get into the canal, into the system, and get here to our delivery point so we can fill the dugout — that’s going to take upwards of a week. So really, we’re in trouble.”

In a joint statement to Global News on Tuesday evening, Minister’s Jason Nixon and Rick Wilson, said “productive meetings” had been held to help resolve the issue.

“We want to thank Chief Grier and Council for their hard work and partnership in this process.”

Although neither party disclosed what the issue was, in a statement to Global News on Friday, Grier added that there has been some tension with the government, following a proposed agreement and counter offer from the nation.

“Unfortunately, in advance of conclusion of talks, there have been many instances of Ministry of Environment contractors conducting work on our Reserve lands. Needless to say, that is unacceptable,” the statement read.