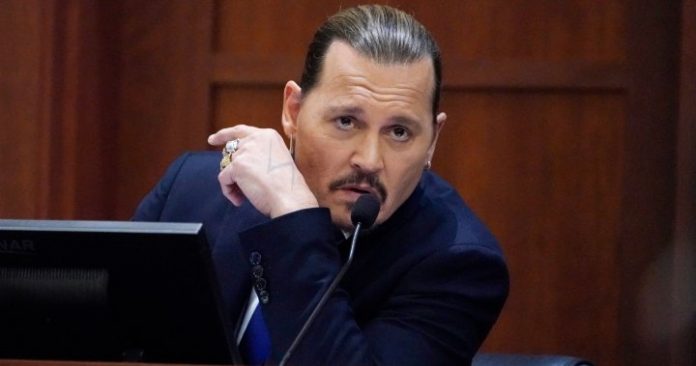 NOTE: This article contains details and descriptions that are graphic and disturbing. Please read at your own discretion.

Johnny Depp‘s cross-examination continued Monday as he took the stand for a fourth day to testify against ex-wife Amber Heard, whom he has accused of ruining his reputation and career with false accusations of domestic violence.

From co-stars to lovers to foes, jurors (and the world at large) have watched the former couple battle it out through their lawyers, as each fights to paint the other as the more toxic individual in the relationship.

So far, Depp has testified that he never physically abused Heard or any other woman. He’s maintained that Heard was an instigator in the relationship, who would push him to become embroiled in profane arguments. He also said that Heard punched, kicked and threw objects at him over the course of their relationship.

Monday’s cross-examination of Depp began with several audio clips. In the first clip, Heard told Depp, “Go put your cigarettes out on someone else.” In the audio, Depp responds by calling Heard a “fat ass.”

In another audio recording, jurors listened to Depp tell Heard if he does not walk away from an argument, there will be another “bloodbath.”

Further audio played in court included yet another argument between the couple, where Depp yelled at Heard and called her “a fu-king c-nt.”

As evidence continued to be submitted by the defence, the court was witness to various text messages and audio recordings in which Depp called Heard degrading names and appeared rageful.

A text message from Depp to his agent was also read in court. In the message Depp says, “She will hit the wall hard!!!! I can only hope that karma kicks in and takes the gift of breath from her.”

Afterward, another text message from Depp to his security guard was read aloud in which Depp wrote he would bite off and swallow the nose of anyone who would ask about his relationship with Heard after their divorce.

More texts from Depp, this time to his doctor in 2015, were submitted as evidence. In the lengthy message, Depp writes Heard is “as full of sh-t as a Christmas goose.” In the message, he complains about how “ambitious” Heard is and speculates he was “acquired” to advance her career.

“I cut the top of my middle finger off,” Depp writes in the same message to his doctor, though the actor testified this was not an admission of self-mutilation, but rather “just the way it was worded.”

Last week Depp detailed for the court his version of the couple’s now-infamous trip to Australia, where they were staying while Depp filmed the fifth movie in the Pirates of the Caribbean franchise.

Depp told the court that Heard threw a vodka bottle at him, which shattered on his hand and severed the top of his middle finger.

After a brief morning break, Depp returned to the stand for questioning from his own counsel.

Depp testified he felt a “blinding hurt” when his ex-wife penned the Washington Post article at the centre of this trial. Depp added Heard’s article impacted his involvement in the Pirates of the Caribbean movies, claiming the allegations against him have prevented the characters in the franchise from having a proper goodbye.

On the stand, Depp testified about the now-infamous text messages from Depp to WandaVision‘s Paul Bettany. In the messages, Depp called Heard a “slippery whore” and suggested that they drown and burn Heard before having sex with “her burnt corpse afterward to make sure she is dead.”

Depp said while he is not proud of the language used in the texts, the messages were never serious. He claimed the messages about burning Heard’s body were references to “dry British humour,” namely Monty Python.

After a lunch break, the trial resumed with more talk of Depp’s severed finger — another audio clip was played in which Heard complained to Depp about walking away from arguments instead of resolving them.

Depp testified he never wanted his relationship with Heard to end the way it has, with both he and Heard involved in a public divorce and legal battle. “No one deserves to live like that, not her, not me, not anyone,” he said.

A lengthy audio clip of the ex-spouses arguing was played in court, in which Depp is heard attempting to leave the conversation. He can be heard telling Heard, “I don’t want to be with you.”

In the audio, Depp removes and throws what is later revealed to be his wedding ring; a series of clangs can be heard as it hits the ground.

When Depp’s lawyer asked where he had been attempting to go in the audio, the actor testified, “Anywhere. Away.”

A second lengthy clip features another argument, this time with Depp and Heard debating the way they deal with disagreements. Heard pleads with Depp not to continually leave.

“It causes me so much stress when you walk away from me,” Heard said in the audio.

“I want space, and I will take my space whether you like it or not,” Depp replied in the clip.

“This is not happiness,” Depp later said in the audio.

“This causes me so much fu-king stress, I’m going to die,” Heard replies.

“Please you’re killing me with this. You’re fu-king killing me,” she continued.

Finally, Depp testified about some of the most shocking evidence that was presented at the end of Thursday’s cross-examination: a five-minute audio clip of one of Depp and Heard’s last in-person meetings in 2016.

In the recording, Depp can be heard repeatedly trying to convince Heard to cut him with a knife and threatening self-harm.

“Do you want to cut me somewhere?” he asks.

“Please don’t hurt yourself,” she says.

Several times throughout the clip, Heard repeatedly asks Depp not to cut himself and tells him she will not cut him, either.

When asked about the context of the audio clip, Depp said, “I wasn’t threatening to hurt myself.”

He testified that he was “broken,” and that he was asking Heard to “spill my blood because that was the only thing she didn’t have at that point.”

“I really was at the end. I couldn’t take it anymore,” Depp said.

The final piece of evidence submitted during Depp’s testimony was a conversation between he and Heard in which he proposed writing a joint letter about taking their business out of the public eye.

Heard is crying in the audio recording and told Depp that her reputation has been ruined. When Depp complained about losing a finger and having a can of paint thrown at his nose, Heard replied, “You can tell people it was a fair fight and see what the judge and jury think.”

In the clip, Heard told Depp to tell the world he is a “victim of domestic violence.” Depp replies, “I am.”

Throughout his testimony last week, Depp has repeatedly maintained that he bears the characteristics of a “Southern gentleman” and that he has not been addicted to illicit drugs or alcohol (apart from Roxicodone).

The legal battle between the two stars has captured the attention of spectators around the globe, with both Heard, 36, and Depp, 58, claiming to be victims of violence. The initial court case began when Depp filed a $50-million defamation lawsuit over a Washington Post op-ed penned by Heard in late 2018 about domestic abuse.

Heard did not mention Depp by name in the article, but the actor alleges his reputation and career were still “devastated” as a result.

Depp’s lawyers have already called on several witnesses, including friends, the couple’s therapist and the doctor and nurse who claim they treated the Pirates of the Caribbean actor for substance abuse issues.

2:43
Defamation trial: Depp testifies about photo of him sleeping with melted ice cream on his lap


In opening statements delivered by the former spouses’ legal teams last week, Depp’s lawyers claim Heard is “choosing to lie about him for her own personal benefit.”

Heard’s lawyers argued the opposite, claiming freedom of speech allowed the Aquaman actor to pen the Washington Post op-ed.

Canada gas prices: How is the price of gas set?

Ed Fast on why he left role as Conservative finance critic