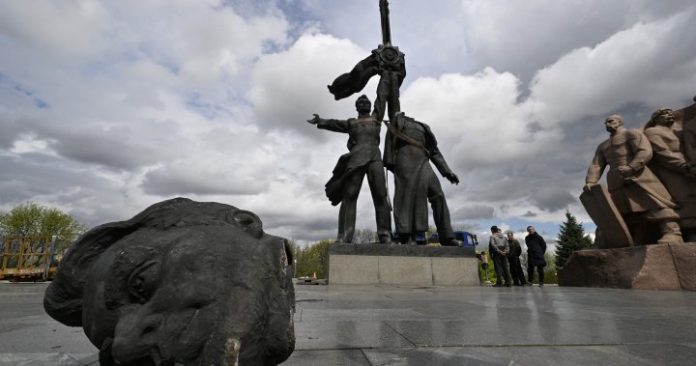 The clutches of Communism proved almost too strong for Kyiv on Tuesday, as a symbolic move to dismantle a controversial Soviet monument almost ended in failure.

Workers spent hours trying to remove a famous statue in the Ukrainian capital. Overlooking the Dnieper River, it depicts a Ukrainian and Russian worker holding hands in solidarity.

The statue is part of the Peoples’ Friendship Arch monument, which was built in Kyiv by the USSR in 1982, and is the first of 60 such monuments that the Kyiv City Council announced would be removed to “decommunize and de-Russify” the capital.

“The Russians destroyed our relationship, destroyed [the] friendship between our countries,” Kyiv Mayor Vitali Klitschko said at the site on Tuesday, over the sound of a circular saw working on the Russian workers’ left foot.

The city’s most recent decommunization process began on Tuesday shortly after 1:30 p.m. in front of a crowd of onlookers with the accidental decapitation of the Russian worker statue, as its head broke off during an attempt to secure the monument with crane straps.

The head tumbled to the ground and rolled to a stop. Witnesses then began using the dismembered cranium as a prop to pose with or on.

Amid the hijinx, work to dislodge the monument continued.

Slightly ironically, this Soviet era monument just will not budge

Workers have been trying to dislodge it for the past 3.5 hours as part of a move to take down 60 Soviet monuments in Kyiv. After several failed attempts, workers have taken to it with a crowbar

After about five hours of attempts to pry the bronze statue from its base ensued — first with a circular saw and crane, and later with desperate attempts with a crowbar — workers sawed through the statue’s feet and gently lowered it to the ground with the crane at about 6.30pm.

As well as dismantling the 60 monuments, memorials and memorial plaques, Klitschko, who was in attendance to oversee the beginning of the work on the statue, said 460 streets and other places in Kyiv with Russian ties would be renamed.

He said Tuesday was a “symbolic” day for the city.

Russia is attacking Ukraine’s Donbas. Here’s how the war may change

Klitschko said he hoped the Peoples’ Friendship Arch site would be renamed “Free Ukraine.” The arch overtop will remain but will be repainted in the colours of the Ukrainian flag.

“It’s our goal to be part of democratic European families… It’s actually the reason of the war because the Russians want to … rebuild the Soviet empire. We were in the USSR and we don’t want back [in it].”

Ukrainians who gathered to take in the spectacle agreed — but many said the removal process of such monuments should have started years, if not decades, ago.

‘We don’t have friendship with Russia anymore’

Some couples held onto one another as they looked on. Others came with bottles of wine under their arms. One woman called a friend on her iPad so they could both watch it together. Many took turns posing with the decapitated head.

Dmitry Sobolev, from Kryvyi Rih, central Ukraine’s largest city, which has a large Russian-speaking population, posed for a photo with his foot on the Russian statue’s head. He said he felt “happy” capturing such a moment.

“Now I feel happiness, because there is no friendship between [our] people, because it is ‘the so-called friendship’, because the enemy has come and civilians and children are being killed. We see bombardments and destruction every day. My heart is breaking, and now there are tears in my eyes.”

Other Ukrainians who gathered to watch the dismantling process echoed similar statements.

Iryna Zhivoluk, who came with her parents, said her family was “very happy” the monuments were being removed. She said her parents did not recall Soviet times favourably.

“We don’t have friendship with Russia anymore. It’s a historical moment, but I also think it should have been done 30 years ago,” she said.

Poplavskiy Yuriy, who held his wife as they watched workers attempt to dislodge the statue, said this was an important moment for the “end of Russian propaganda,” but it was long overdue.

“But it’s not only about this monument, it’s about Russian propaganda and Russian narratives,” he said.

“Next… it is [Russian] language, army and beliefs.”

Yuriy had recently returned to his home in Kyiv after evacuating to the west of the country for several weeks. He said it was difficult to say if he felt safe now, but he hoped so.

The Peoples’ Friendship Arch has long been a controversial landmark for Kyiv.

But its Soviet ties and public unease with its meaning were overlooked as it became a tourist draw, due in part to its commanding views over the city and river.

In 2016, Ukrainian Minister of Culture Yevhen Nyschuk announced that the entire complex, including the arch, would be dismantled as part of ongoing Ukrainian efforts to decommunize the country. In turn, they’d  replace it with a memorial to the war in Donbas. However, a lack of funding and concerns over its impact on tourism meant that never transpired.

In 2018, human rights activists painted a large crack at the apex of the arch to illustrate the troubled ties between the two countries.

In a statement on the dismantling on the monuments when the move was announced on Monday, Kyiv City Council member Kseniya Semenova said the monument’s removal was necessary to “protect the cultural space of Kyiv and minimize the cultural impact of the pro-Russian narrative on the worldview of Kyiv residents and guests of the capital.”

“We must get rid of the memorials that perpetuate Russian, imperial, communist and anti-Ukrainian figures, events and symbols forever,” she said.

— with files from Crystal Goomansigh.

Shrinkflation is happening on grocery store shelves. What it is, and how to avoid

‘I knew that death was coming’: Eagles of Death Metal singer testifies about Paris concert attack