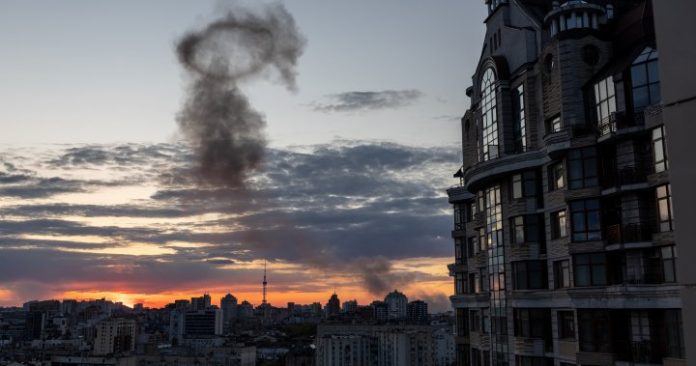 The explosions, which Kyiv Mayor Vitali Klitschko said took place in the Shevchenkivskyi district near the city centre at about 8 p.m. local time, sent large plumes of black smoke into the air.

At least 10 people were wounded in the attack, including some who were trapped in the rubble when two buildings were hit, rescue officials said. Earlier reports that one person had died were later withdrawn.

The explosions could be heard across most of the city, but a wary Ukrainian population largely resisted calls to move to bomb shelters, continuing to sit at restaurants and go about their night as usual.

Roughly two hours after the initial strikes, at least two more explosions were heard in the capital.

Two explosions in central Kyiv tonight in the Shevchenkivskyi District

Explosions very close to city centre, map below shows the location of the district

UN Secretary General António Guterres is still here – his press conference was playing on the TV when explosions were heard pic.twitter.com/vFrin2xnv7

The attack came shortly after Zelenskyy and Guterres held a press conference in which Guterres condemned the atrocities committed by Russian soldiers in towns such as Bucha, which he toured during the day.

What happened in Bucha, Ukraine? Here’s what you need to know

5:23
Missiles strike Kyiv after UN chief visits over war crimes in the region

Guterres also visited the devastated towns of Borodianka and Irpin, near Kyiv, and urged Russia “to accept to cooperate” with ongoing investigations into war crimes by the International Criminal Court (IRCC).

Guterres called the war “an absurdity” and posted a photo on Twitter of himself outside a destroyed residential building in an undisclosed location, with the caption: “War is evil.”

Bulgarian Prime Minister Kiril Petkov was also in Kyiv for a meeting with Zelenskyy on Thursday. During Petkov’s visit, he discussed energy and logistics support with Zelenskyy and, according to a tweet, talked about exploring sending wheat through the Bulgarian port of Varina.

Ukrainian Minister of Foreign Affairs Dmytro Kuleba tweeted that Russia had struck Kyiv with cruise missiles while the two dignitaries were in town.

“By this heinous act of barbarism Russia demonstrates once again its attitude towards Ukraine, Europe and the world.”

Russia stroke Kyiv with cruise missiles right when UN Secretary General @antonioguterres and Bulgarian PM @KirilPetkov visit our capital. By this heinous act of barbarism Russia demonstrates once again its attitude towards Ukraine, Europe and the world.

Until now, Kyiv has largely escaped the shelling that has been inflicted on the rest of Ukraine.

Russian troops retreated from the area surrounding Kyiv on March 31, after largely being stalled in the surrounding districts such as Bucha, Irpin and Hostomel.

–With files from the Associated Press

Car crashes: Women more likely to be trapped than men

Canadian business: Five things to watch for this week