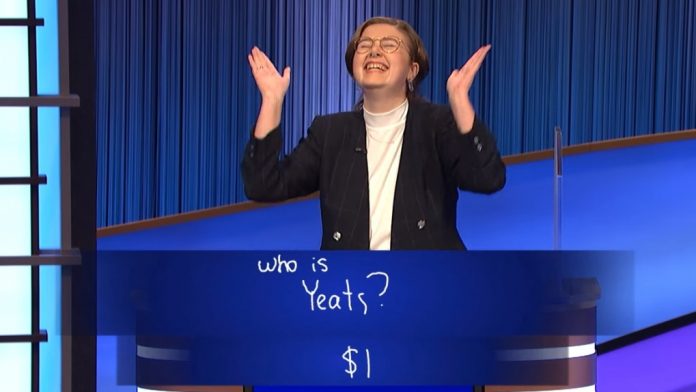 Wednesday night’s “Jeopardy!” episode was a nail-biter, but Mattea Roach managed to squeeze out her 17th win — this time by just $1.


With contestant Ben Hsia — an engineer from California — hot on her tail, Roach took a chance on a Daily Double under the “Anatomy of Words” category, wagering $8,000 Wednesday night.


“You know what, if I wager a lot and lose today, like, whatever, I had such a good run,” she told host Ken Jennings.


The risky bet paid off, with Roach correctly guessing “rib” to the following clue: “to gently tease another person.”


“This has been a roller-coaster of a game,” noted Jennings.


The category was “Poets” and the clue was this:


He guessed the correct response – Yeats – earning him $27,200, and putting him in a tie with Roach.


Roach waited until the very end of the music to scribble her response. She had only wagered $1, but with the correct response, it earned her $27,201 — just $1 more than Hsia.


According to the “Jeopardy!” daily box score, Roach attempted to buzz in 41 times and was successful 31 times, for a success rate of 76 per cent.


Roach, who is originally from Halifax but now lives in Toronto, first applied to be on the long-running game show in 2020. This January, she was invited to Los Angeles to tape an episode.


Roach will attempt her 18th win Thursday night, when she will face off against Renee Russell, a branch office administrator from Maryland, and Manav Jain, an undergraduate student from South Carolina.


Her wins give her the show’s longest winning streak by a Canadian and have earned her a spot in the Tournament of Champions, which is set to air in the fall.