Formula One pictured a race in Miami and envisioned sun, sand, beaches and boats.

So when the inaugural Miami Grand Prix landed at Hard Rock Stadium, nowhere near the South Beach backdrop F1 was seeking, the promoter said don’t worry.

Done. They built a fake marina. With fake water, and all.

Well, it’s not really water at all in The Mia Marina, located between turns 4 and 6 at the purpose-built venue around the Miami Dolphins’ stadium. It can be found at the corner of NW 27th Ave. and NW 199th St. in Miami Gardens, a land-locked neighborhood some 15 miles away from F1’s initial desired downtown location.

It isn’t exactly Monaco, but the man-made marina is a 25,000-square-foot dry dock designed to look like water. The 10 yachts are real — one appears to be booked by Michael Mak, the local founder of Celebrity Sports Entertainment; one waved the British flag; another is named “Wheels” — but the water is just plywood that’s been covered in a decal.

Dry-docked yachts sit on a painted surface simulating water at the site of the Formula One Miami Grand Prix auto race at Miami International Autodrome, Wednesday, May 4, 2022, in Miami Gardens, Fla. The race is Sunday. (AP Photo/Lynne Sladky)

It’s part of a five-star weekend experience created by Tom Garfinkel, vice chairman of the Miami Dolphins and Hard Rock Stadium and managing partner of the inaugural Miami Grand Prix. He’s worked with owner Stephen Ross to turn Hard Rock Stadium into a global sports and entertainment venue worthy of the top events in the world.

Hard Rock has hosted Super Bowls, college playoff games, a major tennis tournament, international soccer, concerts and the “Rolling Loud” musical festival. From Jay-Z and Beyonce, to Serena Williams and Neymar, the biggest names have all been to Hard Rock.

And on Saturday, former First Lady Michelle Obama watched an F1 practice session from the back of seven-time champion Lewis Hamilton’s pit.

“Steve Ross had a vision and for us to truly host the world’s great big events, and for that to be true, Formula One has got to be on that list,” Garfinkel told The Associated Press. “I don’t know there’s another stadium in the world that can say they’ve had Serena Williams, Roger Federer, Lewis Hamilton and Max Verstappen, Patrick Mahomes and U2 and Jay-Z and Beyonce and Messi and Neymar all at the same venue.”

The event is the hottest ticket in sports right now. George Lucas was a guest Saturday, and so was Greg Norman, Michael Strahan and Jeff Gordon. The English entertainer James Corden has been in the paddock three consecutive days, and Buffalo Bills quarterback Josh Allen was hanging outside McLaren hospitality awaiting friend Daniel Ricciardo.

“The demands from sponsors and fans has been off the charts, unlike anything I’ve seen in my time in Formula One,” said McLaren head Zak Brown, an American. “I really like where we are in North America as far as Formula One’s popularity.”

Garfinkel was pursuing a race in Miami long before F1 built a fast and frenzied American following behind the Netflix docuseries “Drive To Survive.” The race wasn’t officially added to the 2022 calendar until last season — it gives the United States two races for the first time since 1984 — but the first meetings were in early 2018. 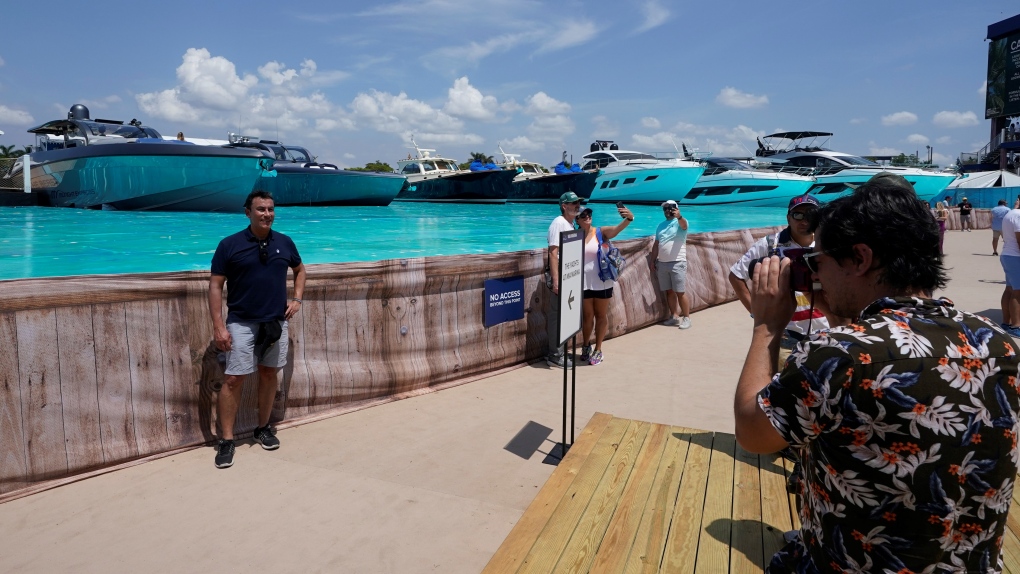 Race fans pose for photos at the fake marina and beach club during the Formula One Miami Grand Prix at Miami International Autodrome, Friday, May 6, 2022, in Miami Gardens, Fla. (AP Photo/Darron Cummings)

F1 had been purchased by Liberty Media, an American company, and Garfinkel figured the U.S. might have a shot at expansion. Miami is the 11th different venue to host an F1 race in the United States, but the series had struggled to gain traction in the country until late. The U.S. went four years without an F1 event before Circuit of America’s in Austin, Texas, brought the European series back to the States in 2012.

It took years for COTA to grow, and behind the “DTS” mania last year’s race in Austin drew more than 300,000 over three days. The U.S. will have three races in 2023 when the Las Vegas Strip is added to the F1 calendar.

“The city is hyped — is that how you say it?” Wolff said. “Formula One is all around, the amount of guest requests we have is amazing. I think we’ve finally landed in North America.”

Attendance was capped at 85,000 a day in an attempt to create a high-end experience void of long concession waits and freedom to roam the massive grounds. A gondola can take guests from the marina to the The Beach Club, where Post Malone went head-to-head with F1 qualifying.

But there have been hiccups, from congested pedestrian bridges, long walks from point to point under the hot Florida sun, and traffic snarls surrounding the stadium. Some teams were upset Friday over the guest experience inside the Paddock Club, which cost $11,000 for a three-day pass.

Brown cautioned to wait until the checkered flag before grading Miami’s first race.

“Putting on a good first-year event is a challenge to get everything right, given the size and scale and newness to it,” Brown said. “But if you look at Austin, 10 years on, they had record attendance last year. Silverstone has been around for 50-plus years and is already a sellout. So, I think putting on a great event, and then having it be sustainable over decades — I don’t say it’s easy to do, but clearly it can be done.

“Let’s just get it right, put on a good show for the fans, and I think there’s a tremendous amount of runway here.