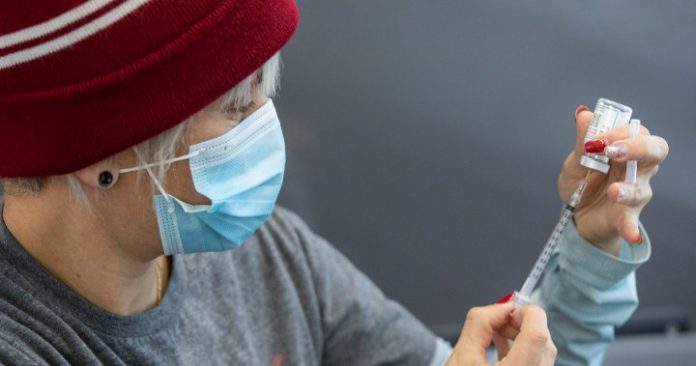 Moderna has asked Health Canada to approve its COVID-19 vaccine for children as young as six months old, a day after requesting U.S. regulators do the same.

If approved, it would be the first COVID-19 vaccine for children under five in Canada — an age group that has remained ineligible for inoculation since the vaccine rollout began in late 2020.

Moderna’s vaccine for children six to 11 was approved in March. Late last month, Moderna said a low dose of its COVID-19 vaccine works in babies, toddlers and preschoolers.

The company said a trial of 6,700 children showed the vaccine was safe and produced a similar antibody response seen in adults. A single dose for children under six is 25 micrograms – about one quarter of the size given to adults and teens, and half the size used for kids ages six to 11.

“We’re not going to get through this pandemic until we have the opportunity to offer all Canadians protection; right now we have a huge group of Canadians, our youngest Canadians, who don’t have that opportunity,” said Dr. Katharine Smart, president of the Canadian Medical Association and a pediatrician in Whitehorse, Yukon.

“This will be a huge step forward and there’ll be many parents very relieved after what probably feels like an incredibly long wait for this information.”

Moderna submitted data to the U.S. Food and Drug Administration (FDA) on Thursday that it hopes will prove two low-dose shots can protect babies, toddlers and preschoolers — albeit not as effectively during the Omicron surge as earlier in the pandemic.

The FDA said on Friday it set tentative dates in June to publicly review COVID-19 vaccines for the youngest of American children, usually the final step before authorizing shots in the country.

Pfizer, meanwhile, is in “ongoing discussions with Health Canada about the vaccine in this population,” but can’t comment on filing timelines in Canada, a spokesperson said.

Parents feel ‘isolated’ in COVID’s 6th wave. How to protect your kids

Pfizer is also testing small doses for children under five, but had to add a third shot to its study when two didn’t prove strong enough.

“If those submissions happen sometime in May, we can expect that it’ll take maybe a month or two, if not more, to have that reviewed,” Dr. Omar Khan, a professor of biomedical engineering at the University of Toronto, told Global News this week.

“It’s safe to say that we don’t know when it will be approved, but that it should just take the appropriate amount of time, and sometimes you can’t know how much that is because you really want to pour through that data and make sure everything is perfect.”

Canada, which finds itself in a sixth wave of COVID-19, reported 3,008 children under 12 coming down as sick with the virus during the week of April 10 to 16.

Children are less likely to suffer from severe COVID-19 illness, but it is possible and its effects can linger in some cases, according to a recent study.

If Moderna’s vaccine for children five and under is found to be safe, Smart encourages parents with kids in that age group to get them inoculated. Vaccination for children five to 11 has lagged behind those in older age groups in Canada.

“I haven’t yet seen the data for children six months to five, but I’m anticipating that it will show safety and that it will be approved,” she said.

“If that’s the case, parents can feel confident that again, choosing vaccination is a way to protect their children from something that they will encounter in their day-to-day life, and vaccination is one of our best tools in terms of preventing those rare but serious outcomes.”

— with files from Global News’ Jamie Mauracher, The Canadian Press and The Associated Press