More than half of the U.S. has had COVID-19, antibody study indicates – National 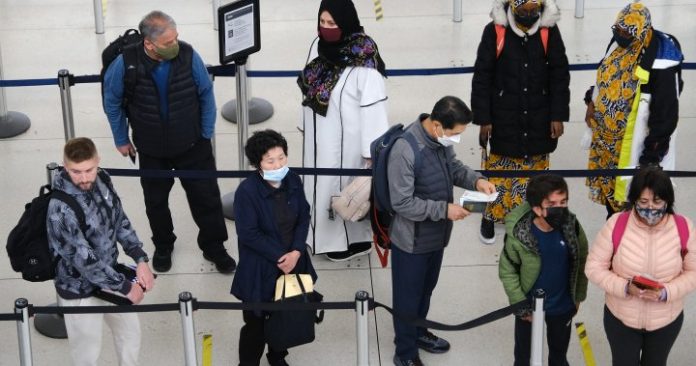 Following the record surge in COVID-19 cases during the Omicron-driven wave, some 58 per cent of the U.S. population overall and more than 75 per cent of younger children have been infected with the coronavirus since the start of the pandemic, according to a U.S. nationwide blood survey released on Tuesday.

The study of blood samples sent to laboratories between December and February – when Omicron cases were raging – showed children, many of whom remain unvaccinated, had the highest rates of infection during that surge, while people 65 and older – a heavily vaccinated population – had the lowest.

Scientists looked for specific antibodies produced in response to the SARS-CoV-2 virus that are only present after an infection and are not generated by COVID-19 vaccines.

In children aged 11 and younger, 75.2 per cent were positive for infection-related antibodies from December to February, up from 44.2 per cent in the prior three month period.

In children aged 12-17, 74.2 per cent carried antibodies, up from 45.6 per cent between September and December. The overall rate was 33.5 per cent for the entire population during that earlier time period.

“Having infection-induced antibodies does not necessarily mean you are protected against future infection,” said Kristie Clarke of the U.S Centers for Disease Control and Prevention (CDC) during a media briefing to discuss the data. “We did not look at whether people had a level of antibodies that provides protection against reinfection or severe disease.”

2:05
COVID had him on his deathbed, then frontline hospital workers saved this man’s life

COVID had him on his deathbed, then frontline hospital workers saved this man’s life

The CDC stressed that vaccination remains the safest strategy for preventing complications from COVID-19.

Samples were collected from commercial laboratories testing blood for reasons unrelated to COVID-19, such as routine medical care. Traditional methods of disease surveillance do not capture all COVID-19 cases because some are asymptomatic, not diagnosed, or not reported, the CDC said.

The median sample size per four-week period was 73,869 collected between September and January. That fell to 45,810 in February.

Overall, U.S. COVID-19 infections have reached 80.8 million, with a 22.7 per cent increase over the last week, and hospital admissions rose 6.6 per cent from the prior week.

Canada eased its travel rules again. What to know, and how to guard against COVID

While deaths fell 13.2 per cent per cent, week-over-week, the United States is fast approaching the grim milestone of 1 million total COVID-related deaths.

More than 66 per cent of the U.S. population is considered to be fully vaccinated against COVID-19, according to federal data. Nearly 46 per cent of those Americans had so far also received a booster dose.