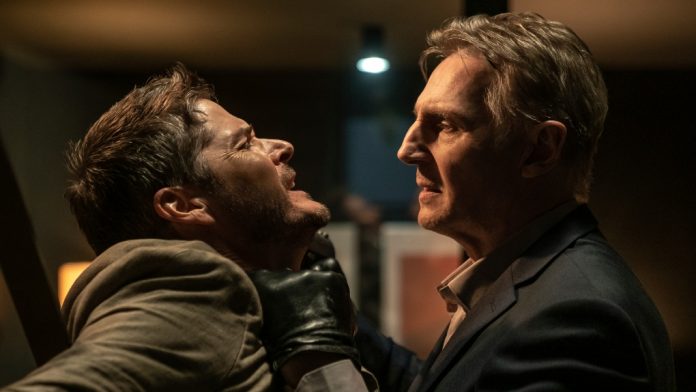 “Memory” is an interesting title for the latest Liam Neeson thriller. Do you remember the last Liam Neeson thriller? Or the one before that? Who was it that got took in that one? It began getting hard to tell these films from one another years ago, and yet they’ve kept coming. “Key & Peele” only seems more prophetic for making the actor’s name plural. “Liam Neesons” is right. He contains, and kills, multitudes.


“Memory,” which opens in theatres Friday, doesn’t much alter the formula but makes for a brutal and bleak variation on the Liam Neeson theme. It casts a broader, more interwoven noir tapestry set around the Texas borderlands, with an ensemble cast including Guy Pearce, Monica Bellucci, and Ray Stevenson. If you come to “Memory” hoping Neeson is going to growl one-liners like “Commit THAT to memory!” or “If memory serves me correctly, you’re toast!” – you may be surprised to find a movie less interested in such action-star heroics than it is something murkier and more cynical.


Does that make it good? Well, I wouldn’t go that far. The filmmaking, by Martin Campbell, the British director of thrillers both glossy (“Casino Royale”) and gritty (“Edge of Darkness”), lacks the texture and sense of place that could have made “Memory” (much of which was shot in Bulgaria) something more than a throwaway. But the performers – Neeson and particularly Pearce – don’t phone anything in.


Neeson plays an El Paso, Texas, assassin named Alex Lewis who tilts more toward bad guy territory than most of the actor’s protagonists. Of course, though, Alex has a moral compass that won’t tolerate certain things. He smashes one guy’s head against the bar for his rude behavior toward a prostitute. And he won’t kill kids. When Alex refuses to kill a 13-year-old girl (Mia Sanchez), a crime syndicate seeking to cover up a child trafficking ring comes after him. At the same time, Alex is beginning to experience early onset Alzheimer’s. That, curiously, only seldom affects his mission to protect the girl and bring down the syndicate, but it does make Alex even bolder; his life is fading away, anyway.


At the same time, the FBI agent Vincent Serra (Pearce) is trying to bring down the ring and is watching over the very same teenage girl, but his higher-ups keep pushing him toward other cases. Pearce’s very presence in a memory-loss thriller is a nod to “Memento.” In one scene, when Neeson writes clues on his forearm to help himself remember, you half expect Pearce to grab the pen and give him a few pointers. There’s much that’s familiar in “Memory,” a remake of the 2003 Belgian thriller “Memory of a Killer.”


Alex and Vincent form a loose partnership as two men trying to carry out one act of justice in a place without it. If the Liam Neeson thriller has cast Neeson as a kind of globe-trotting vigilante and defender of justice in a fallen world, it’s fitting that he should make his way to the U.S.-Mexican border. Credit “Memory” for summoning outrage for the plight of young Mexican immigrants along the border.


Pearce, sweaty and grungy, steadies “Memory”; it’s his film as much as Neeson’s. But if anything, they seem like actors who ought to be in something better than this, an often slipshod movie populated largely by stock and half-formed characters – like Bellucci’s somewhat ridiculous millionaire, an El Paso mogul pulling strings to cover for her son. There’s just enough here to imagine a better, more memorable iteration of “Memory.”


“Memory,” an Open Road release, is rated R by the Motion Picture Association of America for for violence, some bloody images and language throughout. Running time: 114 minutes. Two stars out of four.