This image released by Disney/Pixar shows character Buzz Lightyear, voiced by Chris Evans, and Sox, voiced by Peter Sohn, in a scene from the animated film “Lightyear,” releasing June 17. (Disney/Pixar via AP)

Chris Evans voices the square-jawed, heroic and slightly goofy Space Ranger Buzz Lightyear. After a disastrous crash landing on a strange planet, his attempt to rescue the crew, including Alisha Hawthorne (Uzo Aduba), his best friend and commanding officer, goes wrong, leaving everyone stranded on a hostile planet 4.2 million light-years from Earth. His famous Space Rangers helmet weighs heavy on his head. “Everyone is stuck here because of me,” he says.

Determined to return home, Buzz embarks on a series of experimental flights using various configurations of jet fuel, trying to find the right formula to achieve the hyper speed needed to cut through space and time.

But something strange happens. For every minute he’s in space, a year passes back on the planet. As Buzz tries trip after trip, his BFF Alisha ages, gets married has a child, and later a grandchild Izzy (Keke Palmer), while Buzz remains, more or less, unchanged.

On the planet, sixty years has passed before Buzz, and his smart and adorable computer companion cat Sox (Peter Sohn) try one last test trip, one that will unite him with Izzy, her “volunteer team of motivated cadets” and Zurg, a menacing force with an army of robots.

At first blush, “Lightyear” may seem like the origin story we don’t really need. Twenty-seven years, three sequels, one direct to video flick and a television series later, you wouldn’t think there would be much left to say about the character, but Pixar has found a way.

“Lightyear” is a Pixar film through and through. You expect the top-notch animation, some cool looking robots, cutesy side characters and the occasional laugh for parents and kids. Less expected is how fun the action-adventure is and how effective the patented poignant Pixar moments are.

It’s a hero’s journey, one that actually humanizes the little hunk of talking plastic (or coded series of bits and bytes) and imbues a catchphrase like “To infinity and beyond” with a new, heartfelt meaning.

“Lightyear” may well inspire a renaissance in the character and spawn more toys, but this movie is much more than merch. 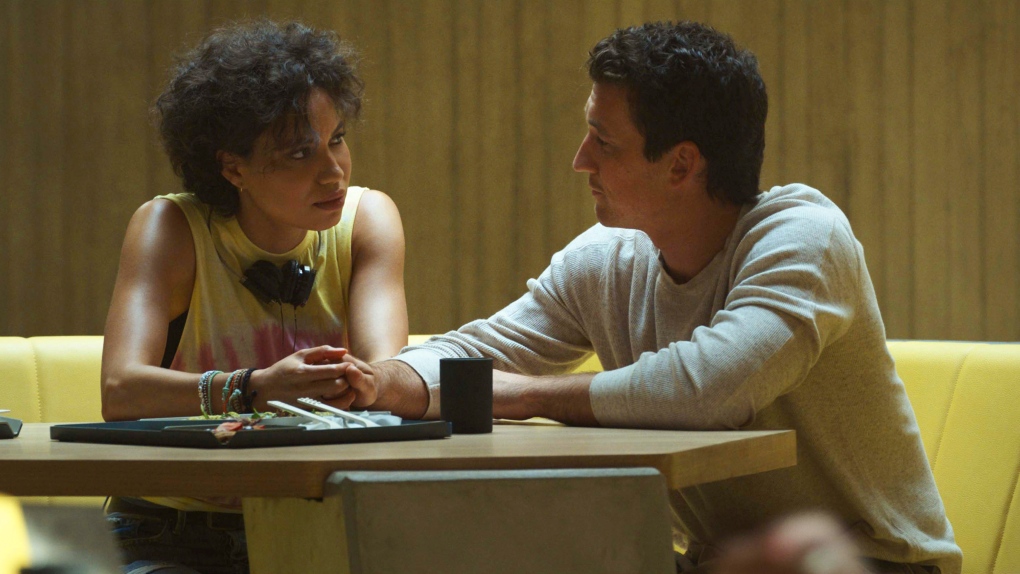 This image released by Netflix shows Jurnee Smollett, left, and Miles Teller in a scene from “Spiderhead.” (Netflix via AP)

I compare the experience of watching “Spiderhead,” a new psychological prison thriller starring Chris Hemsworth, Jurnee Smollett and Miles Teller, and now streaming on Netflix, to going to a nice restaurant with a dirty bathroom. The food, service and atmosphere are top notch, but go to the restroom after dinner and if it’s dirty, that’s what you’ll remember most about your visit.

Such is the fate of “Spiderhead,” a movie that makes a good impression right up until the final minutes.

Hemsworth is visionary Steve Abnesti, a chemist who runs Spiderhead, a remote penal institution where his experimental, mind-altering drugs are tested on inmates. Prisoners live in beautiful cells that resemble hip hotel rooms and eat gourmet food. There are no bars on the doors and not a single orange jumpsuit in sight. “Your presence in this facility, while technically a punishment, is a privilege,” says Abnesti.

In return for the relaxed rules and relative luxury of the prison, inmates are equipped with a module or Mobi-Pak containing mood altering drugs. Administered by the amiable Abnesti, these concoctions are part of a larger study to analyze the effects of manipulating emotions. “Our work will save lives,” says Abnesti. “Not just one life, many lives. We’re making the world a better place.”

Inmate Jeff (Teller) is Abnesti’s go to guinea pig. The pair have a special bond forged over a shared belief that the inmate experiments are for the good of all humanity. But when Jeff is forced to partake in a cruel drug trial, he suspects his trust has been misplaced. “The time to worry about crossing lines was a lot of lines ago,” Abnesti says.

Based on the New Yorker short story “Escape from Spiderhead” by George Saunders, the film explores moral dilemmas and the ethical quandary of exerting control over the powerless for personal gain. The very idea of forced injections is an even bigger, hot button topic now than when Saunders wrote the short story.

So why did I feel like I just left a dirty bathroom as the end credits rolled?

It’s the recency theory. The last thing you see is what makes the lasting impression and “Spiderhead,” despite an interesting premise, some good performances and a growing atmosphere of apprehension and mistrust, rushes the ending to the point where you wonder if the filmmakers ran out of film, time or interest in the story. Tonally, the all-of-a-sudden action packed ending feels tacked on and uninspired.

Ultimately, “Spiderhead” disappoints because it gets so much right, but, in the end, doesn’t trust the idea-driven story to satisfy.

THE PHANTOM OF THE OPEN: 3 ½ STARS 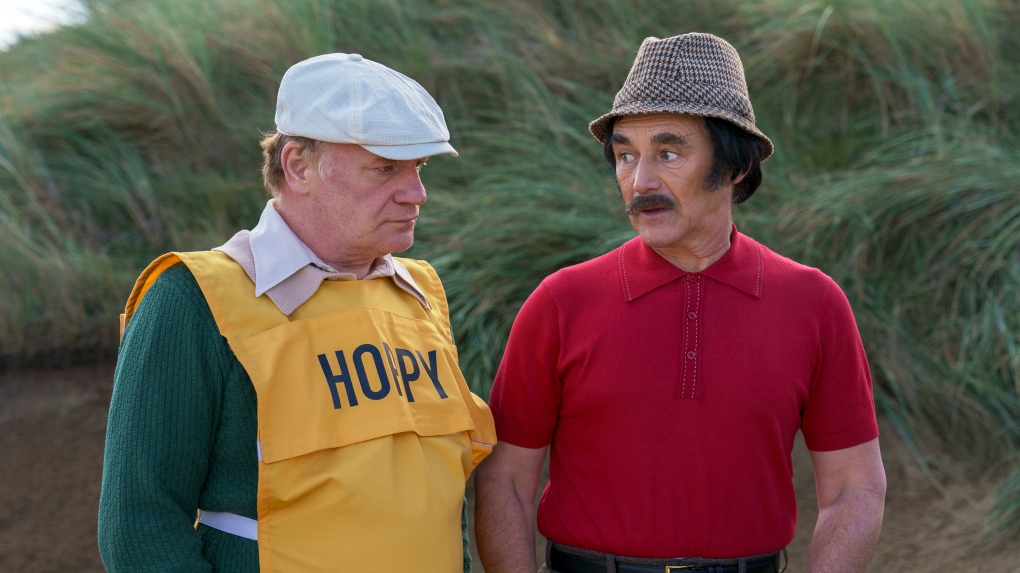 “Life is not an oyster,” says Maurice Flitcroft in “The Phantom of the Open,” a new, feel-good film starring Mark Rylance and now playing in theatres. “It’s a barnacle.” It’s a rare moment of despair for the endlessly optimist man who followed his passions in an unlikely journey to becoming a British folk hero.

Flitcroft, a 46-year-old crane operator in the same shipyard in Barrow-in-Furness, England, where his father and grandfather worked, but after dabbling in painting, music and even stunt driving, he adopted the Oscar Wilde quote, “We are all in the gutter, but some of us are looking at the stars,” as his mantra.

He encourages his wife Jean (Sally Hawkins), his stepson Michael (Jake Davies) and twins Gene and James (Christian and Jonah Lees) to go for it and live their dreams.

In 1976, facing unemployment, Flitcroft takes up golf with an eye toward playing in the oldest golf tournament in the world, the British Open. He’s never played before, but has determination, heart and the belief that “an open championship should be open to everyone.”

Unbelievably (although this is a true story), he qualifies and in the qualifying round scores a catastrophic 121, 49 over par, a record for worst score that has yet to be broken. British Open organizer Keith Mackenzie (Rhys Ifans) is outraged—”I want him banned from every club in the country!”— but the press love the plucky golfer’s underdog story and the public, both at home and abroad, embrace him as an inspiration. “Practice is the road to perfection,” he says.

“The Phantom of the Open” is as sweet as Flitcroft’s tea. He takes six sugars in every cuppa, and that sugar rush keeps him and the movie moving forward.

Falling in line with British true-to-lie-feel-good movies like “Fisherman’s Friends,” “Eddie the Eagle” and “Calendar Girls,” or jovial television shows like “Ted Lasso,” this film is kept aloft by masterfully amiable performances from the cast led by Rylance and Hawkins.

Rylance practically beams light as the upbeat dreamer. What could have been a caricature of a whimsical fantasist is tempered by the actor’s considerable comedic skill, as well as his ability to find the core of humanity in every character he plays. It would have been easy to play Flitcroft as a broad character with a head full of dreams and nothing more, but Rylance sees to it that we see the person not the farce.

“The Phantom of the Open” is kind of old fashioned, but contains solid laughs and dives deep to reveal the class prejudices the crane operator suffered as he pursued bis dream. Most importantly, it is about the importance of following your heart, no matter where it takes you, to find happiness. 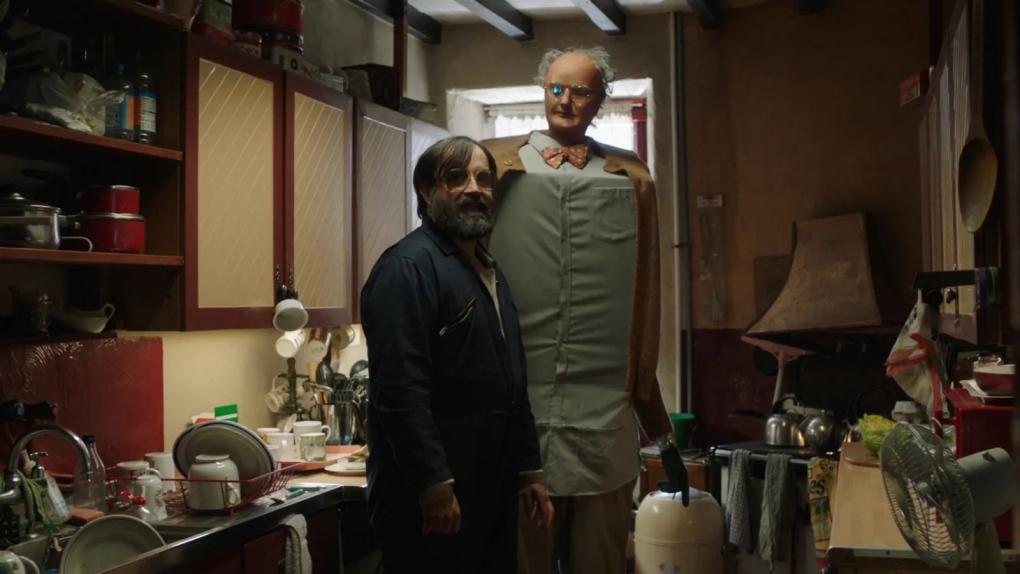 A still from ‘Brian and Charles.’ (Courtesy of Sundance Institute/Barney Tullett)

“The stuff I build isn’t for everyone,” says Welsh inventor Brian (David Earl) in “Brian and Charles,” a quirky new comedy now playing in theatres. “But that’s OK by me.”

Similarly, the film isn’t built for everyone, but those with a taste for sweet-natured eccentricity will find much to like here.

Brian leads a solitary life working on his whimsical inventions, like a puzzle made from ping pong balls, an airborne cuckoo clock, an egg belt and trawler net shoes. “They don’t always work,” he says. “But I’ve got so many ideas up here I just move on to the next one. Doesn’t bother me.”

He‘s a dreamer with an active imagination and a shed stuffed with spare parts, like a broken washing machine and a mannequin head, which he uses to cobble together an ungainly, two-metre tall robot. Unlike most of his other creations, the “very, very cheeky robot” actually works. “I’ve learned building a robot is like making a cake,” says Brian. “You start off wanting a Victorian Sponge and wind up with a Blancmange.”

With a blue light that gives his one eye a twinkle, the artificially intelligent automaton names himself Charles Petrescu (Chris Hayward) and quickly becomes Brian’s best friend. “My tummy is a washing machine!” he exclaims. They watch television together, share Brian’s favourite cabbage-based dishes for dinner and even the occasional hula dance.

As Charles “grows up” he becomes truculent. He wants to leave Brian’s rural Welsh village to see the world and listens to heavy metal music that cuts through the quiet of Brian’s cottage like a knife blade. His new, bad attitude also brings the attention of town bully Eddie (Jamie Michie) who wants Charles for his own, to entertain his kids.

Shot mockumentary style, “Brian and Charles” is an oddball portrait of a lonely man who finds companionship, a sense of purpose and courage in an unlikely way. The title characters, with the help of Hazel (Louise Brealey), a local woman and possible love interest, become a family, with all the ups and downs that suggests.

“Brian and Charles” is sweet, bizarre and quietly funny, with a scene stealing performance from Hayward, whose voice work as Charles is both charming and hilarious. The film has a very distinct voice, heavy on the awkward humour, that won’t be for everyone. But for every gag that feels stretched, there is an undercurrent of amiability that draws the viewer in.

Eddie, the film’s bully, is played with too hard an edge and seems somewhat out of place, but apart from that one misstep, “Brian and Charles” is a singular, original take on finding your logical, not biological family.