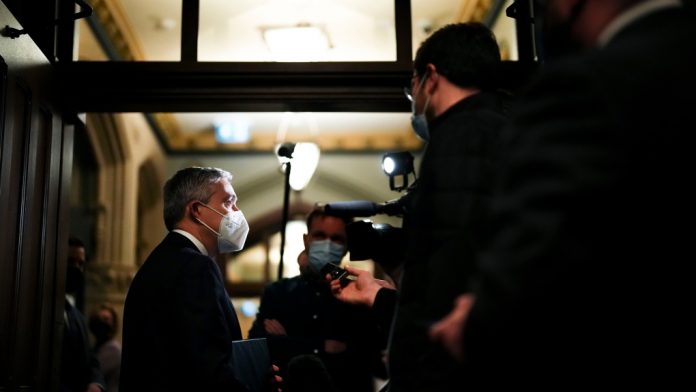 
Speaking to reporters on Tuesday, a day after Twitter’s board accepted Musk’s offer to buy the social media company and take it private, Francois-Philippe Champagne said it’s necessary to “step back” and consider how social media platforms may be used for nefarious purposes when in the wrong hands.


“We’re seeing how important a role [platforms] play in either informing or [misinforming] people. And what does that mean when you have a concentration of these platforms in a few hands? I think it’s just something that we need to reflect on, and make sure that we as a democracy … there will be proper safeguards,” Champagne said.


Musk’s $44 billion purchase is drawing mixed reviews, with some hopeful he’ll strengthen the platform’s free speech objective, while others have raised fears the changes will proliferate hate speech.


“Free speech is the bedrock of a functioning democracy, and Twitter is the digital town square where matters vital to the future of humanity are debated,” Musk said.


The deal was the focus of several questions from Canadian members of Parliament to a Twitter Inc. representative appearing before the House of Commons’ Public Safety and National Security committee on Tuesday.


Bloc Quebecois MP Kirstina Michaud spoke about Musk’s previous comments alluding to censorship on Twitter and asked whether he’ll have an impact on the way the platform operates.


“I can’t speculate on what Mr. Musk will or will not do until that deal closes which could be months. I can only comment on our current approach,” said Twitter’s Director of Public Policy for the U.S. and Canada Michele Austin.


The committee is studying the rise of ideologically motivated violent extremism in Canada.


“It’s just a great example of how a lot of people who don’t actually believe in free speech and free expression, hide behind those argument,” he said. “It’s very concerning when somebody like that would have so much power over a social platform that we all use every day and we have to use for work reasons.”