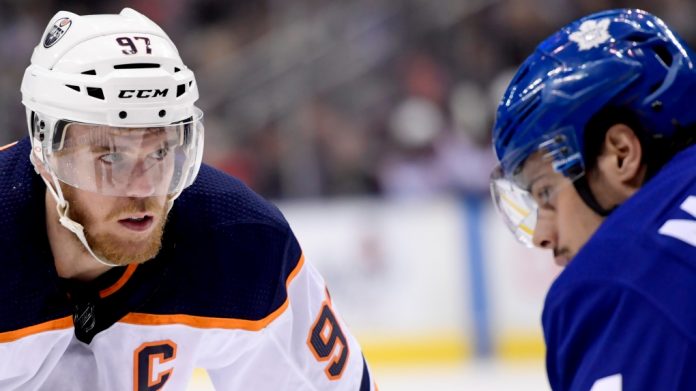 Auston Matthews leads the NHL in goals, Connor McDavid has the most points and Igor Shesterkin has been the best goaltender in the league.


It’s entirely possible none of them wins the Hart Trophy as MVP.


Matthews, McDavid and Shesterkin are among the front-runners, but the pool of candidates goes at least seven deep with Johnny Gaudreau, Leon Draisaitl, Jonathan Huberdeau and Roman Josi also in the mix.


“There’s an argument or a case for each guy where you say, ‘Yep, for sure,’” former NHL player and coach Rick Tocchet said. “I think this is probably the hardest Hart in years. It’s not clear cut for me because I can make an argument for everybody.”


There will be plenty of arguments made before ballots are due Monday evening. Another problem? Only five players can be listed.


“What’s the case? He’s the best scorer,” Toronto Maple Leafs teammate David Kampf said. “He has the most goals. That is the reason.”


Matthews’ 60 goals are the most a player has had in a season since Steven Stamkos scored 60 in 2011-12. Matthews is one of only three players to score that many since the salary cap era began in 2004-05.


An injury slowed Matthews’ push for 60 goals but doesn’t diminish how he has been leading Toronto all season and now into the playoffs.


“It’s just a number,” Leafs defenceman Justin Holl said. “I don’t know if he cares about it that much.”


An added touch: 43 of his goals have come at even strength, also most in the league.


The Calgary Flames were not supposed to be this good, and they are in large part because of Gaudreau, who led them with 111 points going into Tuesday and has been much improved away from the puck.


“It’s not outlandish to have him winning the Hart just because of his production and the way he’s played defence, too,” said Tocchet, now a Turner Sports analyst. “His defensive game has really been at another level. You watch him and he’s down low, he’s winning battles, he’s helping his D out for possessions.”


Edmonton’s captain is the best hockey player in the world and is on pace to win the scoring race for the fourth time in the past six seasons. He’s the most dynamic playmaker in the sport and the reason the Oilers are always a threat to make a deep playoff run.


McDavid has also won almost 54% of his faceoffs and honed his all-around game like other stars before him.


“He had the perfect role model in Sidney Crosby to evaluate his game the way Crosby has grown into a 200-foot hockey player, has grown into a tremendous leader,” said Matt Hendricks, who played with McDavid for two seasons in Edmonton. “Connor has done everything to follow those footsteps but also create his own, as well.”


The New York Rangers look way ahead of schedule in their rebuild, and there are plenty of reasons why, from coach Gerard Gallant to 50-goal scorer Chris Kreider. But the biggest factor has been Shesterkin, who has the lowest goals-against average at 2.03 and the highest save percentage at .936.


“He’s been that good for that team,” Tocchet said. “He dipped a little bit, which is understandable (under) a lot of pressure all year. But he’s still been really good — excellent. His stats are phenomenal.”


McDavid’s running mate isn’t far behind Matthews in the goal-scoring race and is another piston in the Oilers engine to get them back in the playoffs for a third consecutive season.


Draisaitl won the Hart in 2020 after the season was cut short by the pandemic. He is in the discussion again because he does so much more for Edmonton than just creating offence and plays more than any other forward in the league.


“Draisaitl penalty-kills, he takes a lot of draws in his own end on important faceoffs,” Tocchet said. “That means a lot to me for the Hart.”


The most productive player on the best team in the league can’t be counted out. The Florida Panthers score more than anyone else, and Huberdeau is the biggest part of that.


Huberdeau trails only McDavid in scoring, and he hasn’t just done it while playing alongside elite centre Aleksander Barkov. He leads the NHL with a career-high 85 assists and reached 30 goals for the second time in a breakout season.


While Colorado’s Cale Makar is the favourite to win the Norris Trophy as the NHL’s top defenceman, Josi has essentially carried Nashville into the playoffs. His 91 points had him tied for 13th in the league with Avalanche winger Mikko Rantanen, who could be the eighth player in the MVP race.


Nashville has gotten great production from forwards Matt Duchene and Filip Forsberg and relied on Juuse Saros in goal, but Josi as the captain and best player controls and wins games.


“He’s just everything for that team,” retired defenceman Karl Alzner said. “Even if he doesn’t get on the score sheet more than once in a game, he is completely driving play for that team every time he’s out there. He’s always in the mix.”