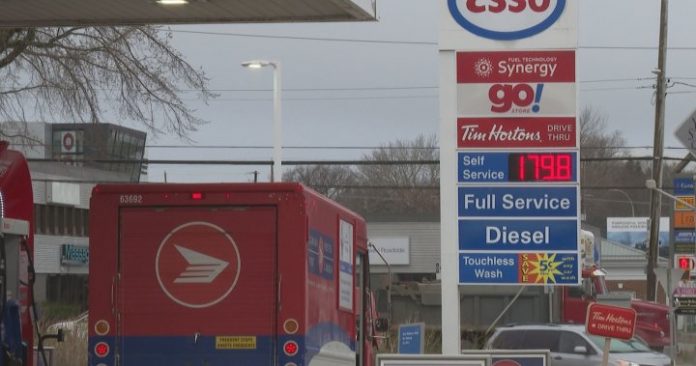 The Nova Scotia Utility and Review Board plans to invoke its interrupter clause for diesel Friday night for the third day in a row, during a week that’s seen diesel prices jump by more than 34 cents in three days.

“This change is necessary due to significant shifts in the market price of diesel oil,” the NSUARB said in a release. The change will take effect at midnight.

This comes as diesel prices in Nova Scotia had already jumped by 8.9 cents during the regular price change on on Friday.

As of Friday, the cost of self-service diesel ranged between 236.3 cents per litre and 238.6 cents in the Halifax area. That’s 34.6 cents higher than it was during last Friday’s price change.

Prices are the highest in the Cape Breton area, where the cost for a litre of diesel is now between 238.3 cents and 240.6 cents.

The cost of gas also went up by 5.7 cents overnight, bringing the price for regular unleaded self-serve gas to between 179.8 and 182.2 cents in the Halifax area, and between 181.7 and 184.1 cents in the Cape Breton area.

Friday’s interrupter clause, which allows for the utility and review board to adjust prices outside of the regular weekly change, will not affect the price of regular gasoline, the NSUARB said.

The cost of food and fuel across the country have been on the rise ever since Russia’s invasion of Ukraine, which has disrupted global supply chains. The World Bank says these price increases likely won’t ease until at least 2024.