Ontario budget 2022: Here are the highlights 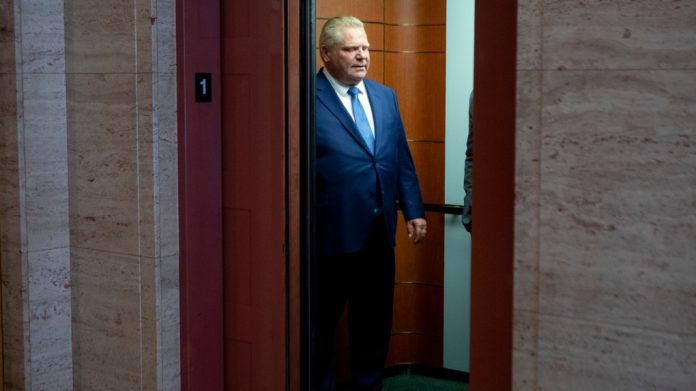 Ontario’s Progressive Conservative government tabled a budget Thursday that effectively doubles as its platform for the spring election. Here are the highlights:


OFF THE PATH TO BALANCE


The budget lays out $198.6 billion in spending, with billions earmarked for infrastructure this year and over the next decade.


The document pledges $158.8 billion over 10 years for highways, transit and hospitals. Infrastructure spending for this year alone is $20 billion.


The fiscal blueprint shows the province managed to bring down its deficit to $13.5 billion in 2021-22 from $16.4 billion in the first year of the pandemic.


However, the deficit is expected to jump to $19.9 billion this fiscal year and the government isn’t planning to balance the books until 2027-28.


A report by Ontario’s Financial Accountability Office released last month had said the province was on track to balance the budget by next year.


Hospital infrastructure projects are slated to receive more than $40 billion over the next decade, including about $27 billion in capital funding.


The province says the money will help support hospital projects already underway or currently in the planning stage, as well as going toward new facilities.


Some of the projects listed in the budget, such as a new inpatient tower and expanded emergency department at the Scarborough Health Network’s Birchmount location, were part of the government’s recent slew of hospital spending announcements.


A new personal income tax credit will help offset the cost of some medical expenses for seniors.


The budget says the new Ontario Seniors Care at Home credit will refund up to 25 per cent of eligible expenses up to $6,000, for a maximum credit of $1,500.


The program would kick in this tax year and be available to those who turned 70 or older in the tax year, or have a spouse that age, and are Ontario residents at the end of the tax year.


The province is promising to boost tax relief for lower-income workers and families and increase the number of people who qualify for the benefit.


The budget says 1.1 million Ontario taxpayers stand to save an additional $300 this year, on average, as a result of changes to the Low-Income Individuals and Families Tax Credit program.


It says the maximum amount will go up to $875 from $850, and more workers will be eligible, for a total of about 1.7 million beneficiaries.


The province says the expanded credit will provide $320 million in total tax relief.


The government says it will pour $25.1 billion over 10 years into repairing, expanding and creating highways, roads and bridges in various parts of the province.


The projects include a new twin bridge over the Welland Canal on the Queen Elizabeth Way and widening Highway 401 in eastern Ontario starting in Pickering, Ont., and Oshawa, Ont.


The province says it will spend nearly $493 million this year to get shovels in the ground for previously announced projects in northern Ontario — including the twinning of Highway 17 between Kenora and the Manitoba border and a broadening of Highway 69 between Parry Sound and Sudbury.


The government says it will change auto insurance rules, a new measure for drivers that follows several pre-budget announcements aimed at motorists.


The budget gives the broad lines of a plan the province says will give drivers more choice and ensure fairness when it comes to insurance, while also cracking down on fraud.


It says drivers will be able to better customize insurance to their needs and buy coverage that is based on vehicle usage.


Some other measures for motorists that are included in the budget were announced before the document was released.


Those include the cancellation of licence plate fees and rebates for those who already paid as well as a temporary elimination of gas and fuel taxes.


Several provincial agencies could leave the Toronto area in a move the government says would save on real estate costs and bring jobs to other regions.


The Ontario Public Service will also look at a hybrid work model for employees as part of the same effort, according to the budget.


The OPS is designing and testing out co-working spaces in Hamilton, London, Ont., Sudbury, Ont., and Ottawa, with a plan to look into other regional locations in the future as needed.


The province recently announced it would look to relocate the headquarters of the Workplace Safety and Insurance Board to London and now says it will consider communities outside Toronto for other agencies, including new ones such as Intellectual Property Ontario.


A series of tax credits conceived in the late 1990s to support cultural media are poised to be revamped to account for current practices and the rise of online production and distribution.


The budget says film and television productions that are distributed exclusively online will be eligible for a credit, and the province will scrap a rule that limited credits to books with more than 500 hard copy editions published.


The budget says the province will also look into simplifying a credit for computer animation and special effects, and review credits related to increasing filming in Ontario communities.