Ottawa motorcycle convoy: What to know about ‘Rolling Thunder’ 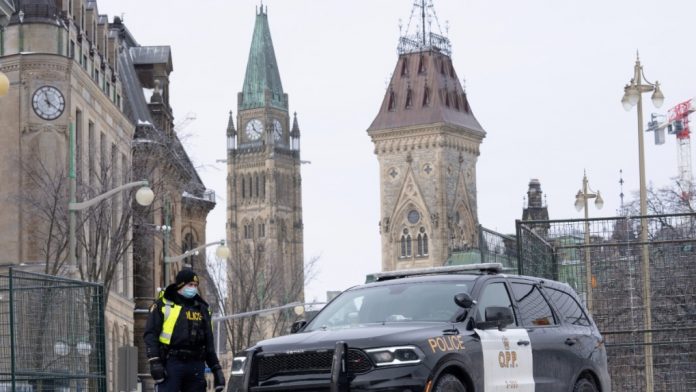 A convoy of motorcycle riders is set to arrive in Ottawa this weekend for a rally on Parliament Hill.


Dubbed “Rolling Thunder Ottawa,” the convoy plans to loop through downtown Friday and Saturday, though their reasons for the rally are unclear.


The event is bound to be a reminder of the downtown protests that paralyzed Ottawa for weeks and inspired similar demonstrations across Canada and around the world over COVID-19 mandates.


Police already plan to send in officers to enforce the rally and will prevent vehicles from entering the area surrounding Parliament Hill.


CTVNews.ca takes a look at what to know about the convoy.


WHAT IS ‘ROLLING THUNDER OTTAWA’?


Between 500 and 1,000 motorcycles and other vehicles are expected to take part in the event, although it’s unclear what the reasons are for the rally.


The “Rolling Thunder Ottawa” website offers limited information on the group itself, although its main Facebook page, which is a closed group, says the convoy is a biker rally to celebrate freedom.


The group lists Veterans for Freedom and Freedom Fighters Canada as its partners.


Veterans for Freedom describes itself on its website as a group of Canadian veterans working to “restore fundamental freedoms for all Canadians” and “uphold Canadian laws.”


Members of its steering committee have ties to the trucker convoy protests seen earlier this year.


Freedom Fighters Canada, meanwhile, is “demanding the end of all government mandates,” with some of its organizers also having attended or supported earlier protests.


The schedule for the “Rolling Thunder” convoy includes a rally and march on Parliament Hill on Friday, followed by an after party.


On Saturday, the convoy will hold a service at the National War Memorial and march to Parliament Hill again in the afternoon. A church service will take place on Sunday.


WHAT HAVE POLICE AND ORGANIZERS SAID?


Police are warning the public to prepare for possible traffic disruptions.


Along with restricting access to vehicles around Parliament Hill, interim Ottawa police chief Steve Bell issued a warning to organizers and participants, telling them: “You will be held accountable for your actions before, during, and after the events.”


In a statement posted to the convoy website on Monday, “Rolling Thunder Ottawa” organizer Neil Sheard said the group is having continued discussions with the Ottawa Police Service and are “cautiously optimistic that the police will work to ensure the safe flow of traffic between the bikers and our fellow Canadian citizens who call Ottawa their home.”


“We do not support blockades, obstruction of police performing their duties, damage to property, or hate & vitriol directed to the residents of Ottawa,” the statement from Sheard reads in part.


In a video posted to YouTube on Sunday, Sheard said that without a route for the convoy to follow, there could be a safety issue.


“Thousands of people are coming to the city. There could be over a thousand bikes coming to your city. We had a route nailed,” Sheard said in the video. “Now it’s going to be a free-for-all.”


With files from CTV Ottawa and The Canadian Press

Burn-proof edition of ‘The Handmaid’s Tale’ up for auction

Mass vaccinations for monkeypox not needed, WHO official says – National