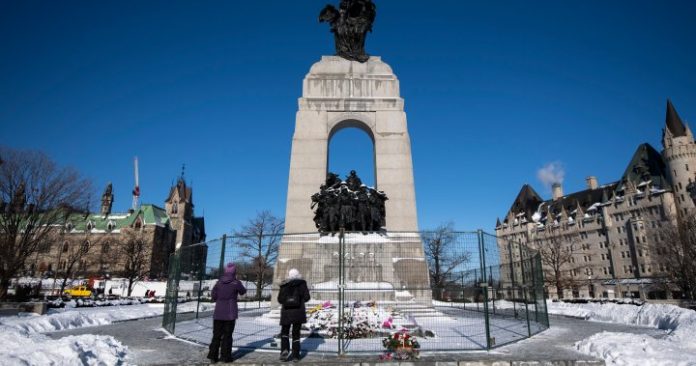 Ottawa police say they have not laid any criminal charges against the woman who danced on the Tomb of the Unknown Soldier at the National War Memorial during the so-called “Freedom Convoy” earlier this year.

That comes after Patricia Ferguson, acting deputy police chief, told journalists earlier on Thursday “that woman has been identified and I believe charges are pending, if not already laid.”

“With regards to the [sic] Chief’s statement about the woman who danced on the Tomb of the Unknown Soldier, a woman who resides out of province was identified. She was spoken to, showed remorse for her actions and police are confident she will not re-offend,” said police spokesperson Carol Macpherson.

“She was processed by other means, which is a police practice. As she is not charged criminally, I cannot provide a name.”

‘Rolling Thunder’ biker convoy to descend on Ottawa. Here’s what you need to know

When asked the meaning of “processed by other means,” Macpherson said the term is “an informal option we have to satisfactorily conclude an investigation.”

“When we conduct a criminal investigation, we have both formal and informal processes to choose from as an option to resolve the matter. That could be criminal charges, Provincial Offence Notices, City Bylaws, diversion programs and/or warnings,” she said.

Macpherson added police “are satisfied this was an isolated incident that won’t happen again from this person.”

1:39
Ottawa police learned ‘a lot’ from trucker protests as ‘Rolling Thunder’ motorcycle convoy to hit the city this weekend

The Ottawa Police Service is facing renewed questions about its capacity and willingness to crack down on demonstrators as residents of the nation’s capital brace for another convoy expected to begin arriving on Friday for weekend demonstrations.

Police handling of the so-called “Freedom Convoy” that blockaded the streets of the capital for three weeks earlier this year sparked widespread condemnation and anger among residents subjected to air horns and harassing, threatening conduct from some convoy participants with little clear police action.

Both police, as well as federal and municipal officials now, refer to the demonstration as an “occupation.”

During the early days of the convoy, individuals could be seen urinating against the National War Memorial and a woman danced on the Tomb of the Unknown Soldier, which commemorates all of the Canadian war dead whose bodies were never recovered.

The monument is the site of the national Remembrance Day commemorations each year and is a hallowed space in the nation’s capital. As a result, video of the disrespect and desecration quickly sparked outrage and prompted police to surround the monument with metal fencing.

Convoy members tore that down shortly after.

Tensions in the community are once again high as police and leaders warn participants in the upcoming motorcycle convoy not to break the law when they arrive this weekend.

Police on Wednesday warned anyone who attended the earlier demonstrations that those who were charged and released on the condition that they not return to Ottawa would be breaching those conditions if they return. The convoy demonstration was deemed an illegal protest.

“No further information is available at this time.”