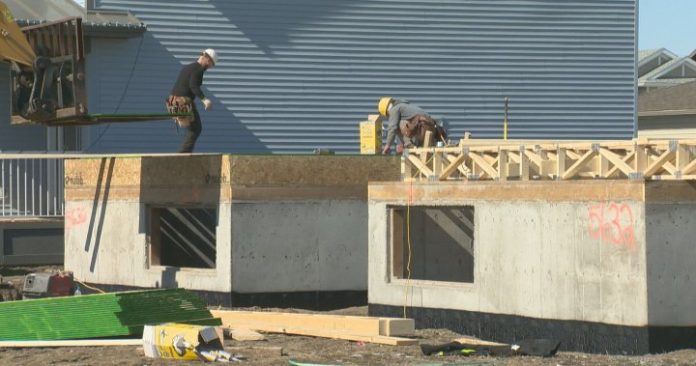 The impacts of inflation and a ever-reeling supply chain are being felt in many areas of day-to-day life.

The home building industry in Saskatchewan is no stranger to these recent hardships.

According to Stu Niebergall, the CEO of the Regina Home Builder Association, construction costs continue to rise and nationally are up about $80,000 per unit or 16 percent from last year, with half of that being attributed to lumber costs and the other half being other building materials.

“On top of that, on average supply chain issues are creating up to a 10 week delay for the construction of homes,” said Niebergall.

While Saskatchewan remains one of the most affordable provinces for new home builders, the trickle down effect from rising costs are being felt in the Prairies.

Niebergall added that home building prices in the province have remained relatively steady for the last 5 years but that isn’t the reality of today.

“In the local market, we don’t see the cost of constructing new homes getting less. We do still think this is a good year to build because we do anticipate prices will continue to rise through 2022 into 2023,” said the home builder CEO.

Brandon Fuchs, the president of Regina’s North Canadian Construction, says it’s the new normal every month to get emails from a supplier about a price increase.

He noticed a recent trend with some clients shifting their projects to later in the year or pausing them indefinitely.

That’s something he says is unfortunate because it may only cost them more money in the long run because the project is unlikely to get cheaper.

“The reality is, if everybody stops doing everything to wait for tomorrow to maybe be better, it’s going to immediately effect our economy,” said Fuchs.

Fuchs says he appreciates both sides and perspectives and there still is a large portion of people who aren’t letting the rising costs stop them.

With such a volatile global market there is no crystal ball to predict when prices might level out.

With that in mind, Niebergall feels that compared to other metropolis’ in the country it’s still a opportune time for families in Saskatchewan to build their dream homes.

“Because the market here hasn’t been as busy as in others centers across Canada, builders here locally have been building very close to demand, they really are just building what they are literally selling.”