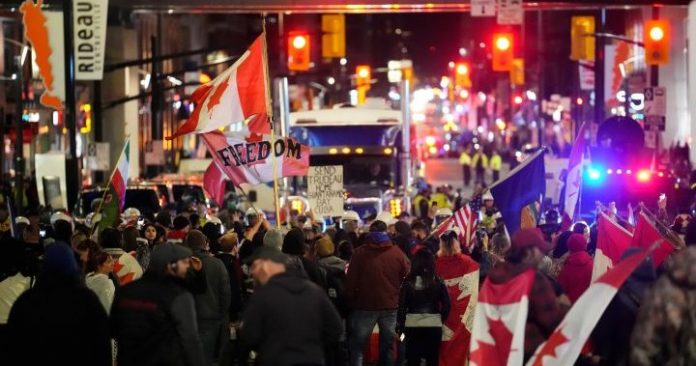 The “Rolling Thunder” protest in Ottawa clashed with police leading to several arrests Friday after a small convoy of vehicles attempted to make their way toward Parliament Hill.

Many of the demonstrators were also part of the “Freedom Convoy” demonstration that seized the capital for weeks in February in protest of vaccine mandates, COVID-19 restrictions and Prime Minister Justin Trudeau.

The protest started relatively calmly on Parliament Hill Friday but as night fell a few hours later, a line of big-rigs, campers and other trucks made their way into the core.

Protesters gathered around the trucks, and police in tactical gear formed a line and faced them down.

In total today:
– Seven people were arrested for various charges, including assault police
– 24 vehicles were towed

There have been no reported injuries, and police remain in full control of city streets. https://t.co/b1fZz3Bv2v (2/2)

Police said in a release that seven people were arrested on various charges, including assaulting police, and 24 vehicles were towed. At least one truck also had its windows broken.

The protest is expected to continue Saturday with a convoy of hundreds of motorcycles through downtown, with a stop at the National War Memorial, before moving to Parliament Hill for another rally.