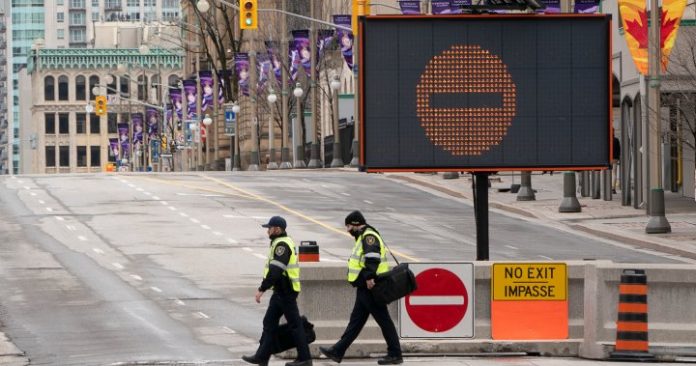 OTTAWA — There’s fencing on Parliament Hill, an exclusion zone around several blocks downtown and hundreds of extra police officers on call as Ottawa braces for the arrival of “Rolling Thunder” motorcyclists Friday afternoon.

The group has not been clear about the cause they’re rallying for, except to say that they will be in Ottawa to “peacefully celebrate our freedom.”

It’s expected hundreds of motorcyclists will arrive Friday ahead of a gathering Saturday morning. They plan to do a loop around the downtown, with a stop at the National War Memorial and a march to a rally on Parliament Hill.

Vehicles involved in the rally won’t be allowed into a zone that includes the war memorial and Parliament, police say, nor will they be allowed to stop along the route, but participants can walk through the area.

“We aren’t going to prevent protesters from attending the nation’s capital to have their voices heard,” said Ottawa’s interim police chief, Steve Bell, during a briefing Thursday.

Neil Sheard, one of the organizers who’s been involved in protests against COVID-19 restrictions, previously warned of a “free-for-all” if police don’t let the group bring their bikes onto the streets around Parliament Hill.

Elgin Street Public School’s principal, Brian Begbie, sent a memo to parents Thursday from the Ottawa-Carleton District School Board saying the board has been in contact with police to ensure school safety concerns are addressed.

“We understand that many families had a difficult experience in February, and may be concerned about another demonstration in the downtown core,” the memo read, directing parents to links to community support organizations.

The protesters say they plan to leave the city on Sunday.

‘Rolling Thunder’ biker convoy to descend on Ottawa. Here’s what you need to know

That’s led to criticism that they may disrupt a planned cycling fundraiser for the Children’s Hospital of Eastern Ontario the same day. Rolling Thunder organizers have added a link to their website and are encouraging supporters to donate to CHEO.

Police have said there will be no tolerance for a long-term protest like the one that occupied the downtown for weeks in February, and any encampments will be dismantled.

The actions of Ottawa police have also been under intense scrutiny since February. Chief Peter Sloly resigned his position, and Bell said the service has learned a lot from the experience.

The February occupation — which ended after the federal government invoked the Emergencies Act for the first time and hundreds of police officers moved in to disperse the crowds, making dozens of arrests — disrupted traffic, closed businesses and led to complaints of harassment, intimidation and hateful conduct.

The Rolling Thunder organization is partnered with several groups apparently linked to the “Freedom Convoy.”

A statement on the group’s website attributed to Sheard says they do not support “blockades, obstruction of police performing their duties, damage to property, or hate and vitriol directed to the residents of Ottawa.”

The statement also encourages supporters to follow the laws, and says police will be held accountable in court for their actions during the event.

“Lastly, as seen during the lawful protest in Ottawa, spread as much peace, love and patriotism to your fellow Canadians as possible,” the statement says.

At a Holocaust Remembrance Day event on Thursday, Prime Minister Justin Trudeau said the world was “shocked and dismayed to see Nazi imagery displayed in our nation’s capital” in February.