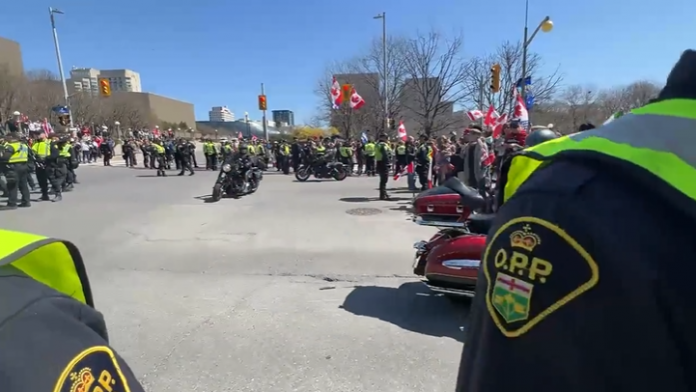 Hundreds of people on motorcycles and on foot rolled into downtown Ottawa for day 2 of the ‘Rolling Thunder’ biker event, as a strong police presence kept an eye on the proceedings.

Veterans for Freedom hosted a memorial service at the National War Memorial at 10 a.m., followed by approximately 400 motorcycles participating in a convoy into the downtown core along Elgin Street.

Live updates on the ‘Rolling Thunder’ motorcycle convoy in Ottawa

“Fear and division equals hate. We may disagree with each other, but we don’t hate each other,” organizer Neil Sheard told the crowd at the National War Memorial Saturday morning.

Sheard had previously told the Evan Solomon Show this week that the bike rally is being held to “help heal and give back the dignity to that monument that was desecrated by the powers that be”, during the ‘Freedom Convoy’ event in January and February.

“They literally engaged the national symbol of freedom,” Alex said as the crowd booed and yelled “shame.”

At the end of the service, the crowd marched down Elgin Street to greet the motorcycle convoy that was travelling on a route outlined by police. Hundreds of people lined the street as approximately 150 motorcycles did several loops of Elgin Street between Laurier and the Albert/Slater section.

Police stopped the motorcycle convoy two blocks from the National War Memorial, and had the motorcyclists travel back out of the core on a designated route. Police announced just before 12 p.m. that the motorcycle rally was complete.

More than 200 motorcycles take part in a convoy along Elgin Street in downtown Ottawa on Saturday. (Aaron Reid/CTV News Ottawa)

One person was arrested following an incident on Elgin Street during the motorcycle convoy. Police said the investigation is ongoing.

Ottawa police tell CTV News Ottawa that ten people have been arrested Friday. Thirty-three vehicles have been towed from the exclusion zone since Friday morning.

Officers from the Ottawa Police Service, OPP, RCMP and municipal police forces have been deployed across the downtown core to monitor the weekend protest. Interim Chief Steve Bell says residents can expect to see more street closures in the downtown core today.

“We have the plans in place to manage what will occur today. We have the resources on the ground here in Ottawa ready to be utilized if there are issues,” Bell told Newstalk 580 CFRA Saturday morning.

The events come after police say officers dealt with an “aggressive crowd” in the area of Rideau Street and Sussex Drive Friday night, outside the Rideau Centre. Hundreds of people marched from Parliament Hill to Rideau Street just after 7 p.m., blocking the street over two hours until police moved in to clear the protesters and several vehicles.

Seven people were arrested for various offences and three vehicles were towed from the street, according to police.  Bell says a “number of people” arrested Friday night were related to court-breach probations related to the “Freedom Convoy” protest in February.

Three vehicles were towed from the area of Rideau Street and Sussex Drive on Friday evening.

“There have been no reported injuries, and police remain in full control of city streets,” police said in a statement, adding streets in the exclusion zone were reopened late in the evening.

“I think that’s what we saw last night and that is what we responded to. We have plans in place, resources in place today to do exactly the same thing. My hope is we don’t need to employ those tactics, but my job isn’t to hope so we’ll continue be prepared, execute the plans we have to make sure that the city streets remain safe and open for the citizens of Ottawa.”

Police have said more than 500 motorcycles and vehicles are expected to participate in the “Rolling Thunder Ottawa” event this weekend. The group hasn’t been clear about the goals of the rallies, but said on its website it will “spread as much peace, love and patriotism to your fellow Canadians as possible.”

“We couldn’t miss it. Me and the guys that came with me, our fathers and grandfathers are veterans,” he said. “These guys are all vets here. It’s all about freedom, it really is. If you go in that crowd, everybody will give you a hug.”

Ottawa police told CTV News that 10 people have been arrested since the beginning of the event on Friday. Seven people were arrested on Friday evening.

On Twitter, police said the driver of a vehicle was arrested for dangerous driving.

“Ignoring police direction at Elgin and Queen, a vehicle drove up on the sidewalk and was intercepted,” police said.

“The driver was arrested for dangerous driving and identified as someone with bail conditions not to enter Ottawa, stemming from charges received during the February occupation.”

Some residents and elected officials have questions about why protest vehicles were able to block Rideau Street Friday evening, despite police promising any vehicle involved in the protest would not be allowed in the exclusion zone.

“It looked clearly like an attempt of reoccupation by vehicles many people have pointed out to me were involved in the February occupation and I was very pleased to see the much stronger police response this time,” Coun. Jeff Leiper said on CFRA.

Leiper, who is a member of the Ottawa Police Services Board, says he has questions about why vehicles were allowed into the area.

“The message from police has been clear – there are no stopping and no parking areas and anyone who does is subject to being towed. They clearly mean it. The vehicles that were stopped on Rideau were towed.”

Bell says police sent a message to protesters planning to occupy the streets.

Several tow trucks were parked through the downtown core Saturday morning to tow any vehicles violating the no-stopping, no-parking rules in the exclusion zone. 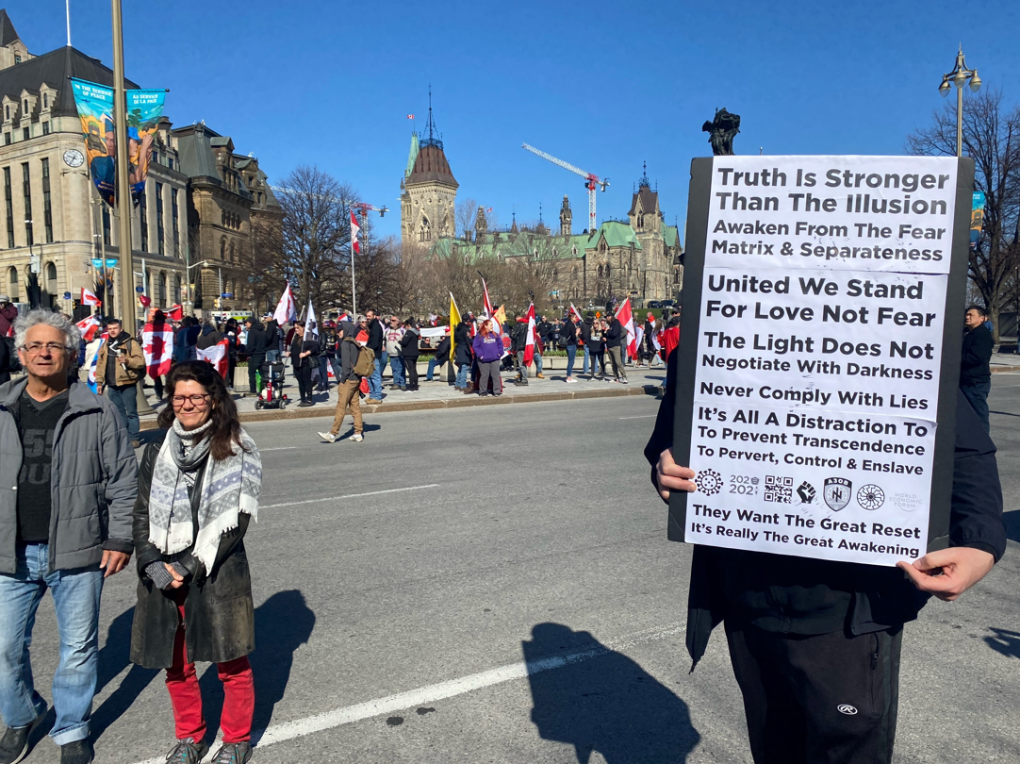 Ottawa police look to idetnfiy a woman on Rideau Street

Ottawa police said Saturday afternoon that officers had identified a woman in relation to an incident on Rideau Street Friday night.

Police had said officers were dealing with an aggressive crowd on the street during the evening.

No other information about the investigation has been released.

Investigators are asking for the public’s assistance in identifying this woman in relation to an incident with police on Rideau St. last night. 613-236-1222 ext. 5166#ottnews pic.twitter.com/uPlJ5zfndF

Three tickets were also issued for noise and smoking violations.

Ottawa police and Ottawa Bylaw and Regulatory Services has set up an exclusion zone, with vehicles taking part in a demonstration, event or protest prohibited from entering.

The exclusion zone stretches from Waller Street to Bronson Avenue and Wellington Street to Laurier Avenue, along with the ByWard Market area from MacKenzie Avenue to King Edward Avenue and Rideau Street to Murray Street.

The exclusion zone is also designated as a no-stopping and no-parking zone. Bylaw Services says any vehicles violating the orders will be ticketed and towed.

Will city hall be open?

Ottawa City Hall and its underground parking lot will be closed until 7 a.m. on Monday.