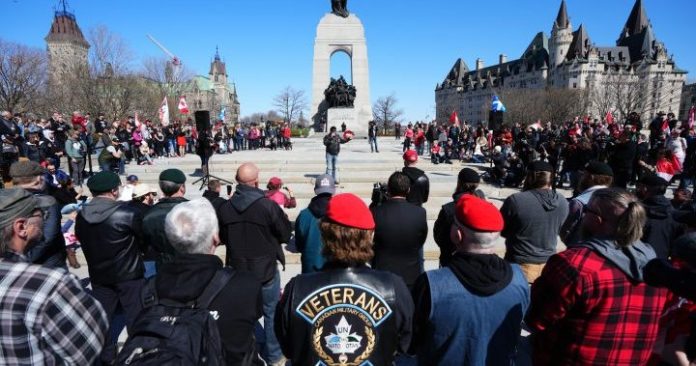 OTTAWA — Former “Freedom Convoy” protesters vowed to reclaim the National War Memorial with a ceremony at the cenotaph on Saturday, marking the first in a series of rallies expected to clog the national capital throughout the weekend.

Speakers recounted the way police removed protesters from the area after their three-week demonstration on Parliament Hill, as hundreds of supporters gathered around the monument to listen.

As hundreds of demonstrators gathered at the memorial that became a focal point during the early days of the protests that effectively shuttered downtown Ottawa for weeks in February, speakers recounted the way police removed them from the scene at the time.

Supporters watched retired Afghanistan veteran Christopher Deering lay a wreath on the Tomb of the Unknown Soldier in a quasi-remembrance ceremony.

Deering said he was detained by police as part of their effort to remove “Freedom Convoy” protesters from the core in February.

“Afterwards, myself and the other peaceful citizens were thrown out of the city like garbage and told not to return to our nation’s capital,” Deering told the crowd Saturday.

The group also took issue with police erecting a fence around the monument in February after a woman desecrated the Tomb of the Unknown Soldier by standing on it during the Freedom Convoy protest. Members of the protest who identified themselves as veterans later dismantled the fence and took it upon themselves to guard the tomb.

Speakers at the event also expressed their opposition to vaccine mandates, COVID-19 restrictions and Prime Minister Justin Trudeau’s government, though supporters were asked to remove slogans with expletives aimed at the prime minister for the event.

The ceremony was part of the “Rolling Thunder” rally, which was initially unclear about its purpose in Ottawa except to say it was organized to “peacefully celebrate our freedom.”

At the ceremony, the majority raised their hands when a speaker asked who was at the convoy protest in February.

That protest lasted three weeks, as big-rigs and other trucks embedded themselves in front of Parliament Hill and set up encampments that blocked traffic.

Officials described downtown Ottawa as falling into a state of lawlessness during the convoy protest, and the federal government invoked the Emergencies Act in an effort to dislodge them and similar protesters who blockaded border crossings.

Eventually, with the help of hundreds of police officers from other parts of the country, Ottawa police removed them from the capital’s streets.

A similar police scene played out Friday evening as a convoy of big-rigs, campers and other trucks attempted to reach Parliament Hill. Police formed a line, wearing helmets and shields, to push protesters back and remove the large vehicles from an area just east of the parliamentary precinct.

Seven people were arrested on various charges, including assaulting police, the Ottawa Police Service said. At least one truck also had its windows broken. The force said Saturday it had towed 24 vehicles as of the night before.

Shortly before the ceremony Saturday, a small group of counter-protesters gathered across the street from the memorial chanting “go home” to express that the protesters were not welcome back in the city.

Police formed a line in between the two groups to keep the peace.

“The Tomb of the Unknown Soldier is not an appropriate place to express partisan political views, it’s just wrong. It’s not what we stand for,” counter-protestor Chris Anderson said in an interview. Anderson said he was a veteran himself, having served seven years as a medical worker.

“In some ways, to me, they’re poisoning the monument,” said Anderson, who wore a t-shirt with a rainbow in support of some of the city residents who felt unsafe due to the demonstrations.

After the ceremony, the crowd moved south to Elgin Street to watch a parade of motorcycles pass by while police kept people away from the road. Police arrested someone in the area for breaching their release conditions related to their arrest during the Freedom Convoy, which stipulated that they weren’t allowed to return to Ottawa.

The motorcycles had initially planned to drive past Parliament Hill and park near the war monument, but police banned vehicles from the area.

“Police will maintain a heavy presence throughout the downtown area,” the local force said in a Twitter message Saturday morning. “Tow trucks are part of the deployment plan. All appropriate enforcement options will be utilized.”

Ottawa Mayor Jim Watson said police are taking “a strong stance” to prevent the kind of prolonged demonstration that gripped Ottawa in February. It’s a first step toward restoring confidence in the force, which faced vocal criticism for letting the demonstration go on so long, he said.

“Obviously what happened in February caused a lot of harm to a lot of people,” Watson said.

The protest is expected to continue with another rally on Parliament Hill Saturday afternoon, featuring controversial speaker Chris Sky, whose real name is Chris Saccoccia.

Sky, a figure in the anti-mask movement, has been noted making anti-Semitic, Islamophobic and racist comments, according to the Canadian Anti-Hate Network.

Rolling Thunder organizer Neil Sheard has distanced himself from that rally, which is hosted by partner organization Freedom Fighters Canada but appears on the Rolling Thunder itinerary.

B.C. dad spreads love, acceptance after only 1 child came to his son’s birthday

Daniil Medvedev: No. 2 back on ATP tour after Wimbledon ban