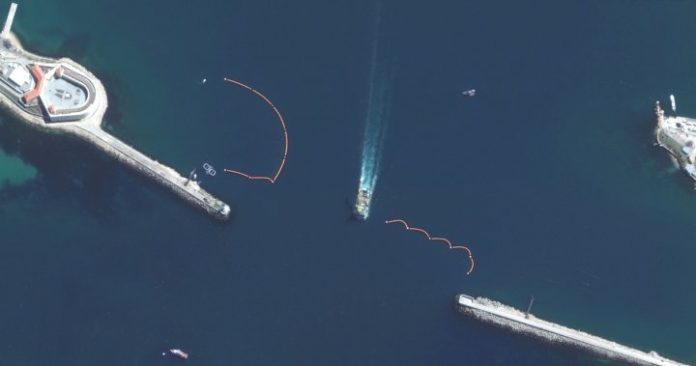 In an apparent attempt to protect a key naval base from attack, Russia has deployed trained military dolphins at the entrance to a main Black Sea port.

According to the United States Naval Institute (USNI), which reviewed satellite images by the commercial firm Maxar, two dolphin pens were moved to the area in February, around the time Russia began its invasion of Ukraine.

The dolphin pens are located at the entrance to Sevastopol harbour in Crimea — which Russian forces annexed from Ukraine in 2014.

The USNI reported that “the dolphins may be tasked with counter-diver operations” to “prevent Ukrainian special operations forces from infiltrating the harbor underwater to sabotage warships,” which sit just out of reach of Ukrainian missiles.

This is not the first marine animal navy project. During the Cold War, both the United States and the Soviet Union trained dolphins to detect enemy divers and mines.

The U.S. has spent at least US$28 million maintaining its own military troops of dolphins and sea lions for potential use in future conflicts.


Russia is also rumoured to have a trained beluga whale as part of its special operative underwater mammal program. According to the USNI, the beluga whale (and other seals in Russia’s military program) are used because they have “heavy layers of fat to keep warm, (and) are better protected against the cold than the bottlenose dolphins used in the Black Sea.”

The Interfax and TASS news agencies cited him as saying that full control of southern Ukraine would improve Russian access to Moldova’s pro-Russian breakaway region of Transdniestria, which borders Ukraine and which Kyiv fears could be used as a launchpad for new attacks.

According to the USNI, it is unclear whether Ukraine has planned any combat-swimmer operations against Sevastopol. Still, dolphins are “widely considered” by naval analysts to be an effective defence against divers, the USNI claims.

Trudeau dodges question about whether Canada is on stolen Indigenous land