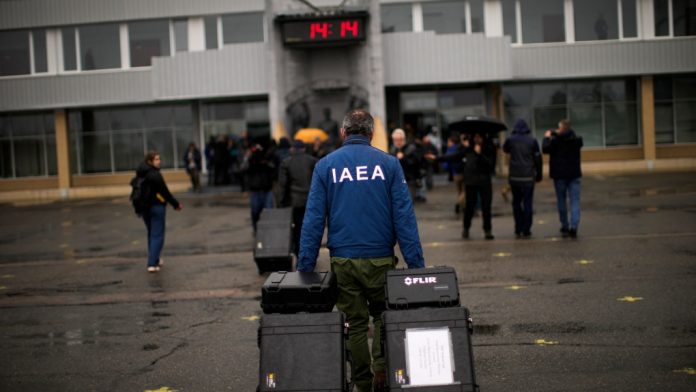 
Thirty-six years after the world’s worst nuclear disaster, the head of the International Atomic Energy Agency said Tuesday that Russian troops risked causing an accident with their “very, very dangerous” seizure of the Chornobyl nuclear plant in Ukraine.


Wearing a blue IAEA jacket and standing under an orange umbrella during rainfall outside the damaged nuclear power plant, agency Director-General Rafael Mariano Grossi said that while the radiation levels are normal, the situation is still “not stable.” Nuclear authorities have to “keep on alert,” he said.


Russian troops moved into the radiation-contaminated Chornobyl exclusion zone in February on their way toward the Ukrainian capital. They withdrew late last month as Russia pulled its forces from areas near Kyiv and switched its focus to fighting in eastern Ukraine.


The site has been back in Ukrainian hands since then, and disrupted communications have been restored.


Ukrainian officials have said the Russian occupiers held plant workers at gunpoint during a marathon shift of more than a month, with personnel sleeping on tabletops and eating just twice a day.


Grossi congratulated the workers on mitigating potential risks during the occupation, including power disruptions.


“I don’t know if we were very close to disaster, but the situation was absolutely abnormal and very, very dangerous,” he said.


Ukrainian President Volodymyr Zelenskyy, noting the Chornobyl disaster anniversary on Twitter, said that “not everyone realized” the dangers of nuclear energy.


An April 26, 1986 explosion and fire at Chornobyl sent radioactive material into the atmosphere and became a symbol of the Soviet Union’s stumbling final years. The international community, including Russia, spent billions to stabilize and secure the area.


The unit where the explosion and fire took place was sheathed in a state-of-art encasement. The dangers at the plant are ongoing, however, because spent nuclear fuel rods requires round-the-clock maintenance. The fuel is from the plant’s four reactors, all now shut down.


An Associated Press reporter who visited Chornobyl this month saw evidence that Russian soldiers dug trenches in the forested Chornobyl exclusion zone in the earliest hours of the invasion, churning up highly contaminated soil.


IAEA team members who were at the site Tuesday to make repairs and do assessments carried black suitcases from their vans into Chornobyl’s buildings. They were bringing dosimeters and other radiation monitoring equipment, Grossi said.


“There is a lot of work to be done after the occupation of this plant,” he said. “We have to do some repair work so we can restore the connectivity that we have with Vienna, so we can provide good information to the Ukrainian people, to the rest of the world.”


The International Atomic Energy Agency, which is the world’s nuclear watchdog, is based in Austria’s capital.


During the Russian occupation, Chornobyl lost its normal electricity supply. Plant workers relied on diesel generators to support the critical work of circulating water to cool the spent nuclear fuel.


Asked whether the dangers posed by the Russian occupation were similar to the ones following the original Chornobyl accident, Grossi replied: “On that occasion, you had an explosion, you had an operating reactor. The situation was completely different. In this case, what we had was a nuclear safety situation which was not normal, that could have developed into an accident.”


Responding to public concerns about the risks of nuclear power during wars, Grossi told reporters the problem was “not nuclear energy. The problem is the war.”

Ukraine: Russia must withdraw to pre-war positions for talks

$500 grant needs to be given directly to N.S. seniors, Opposition says – Halifax