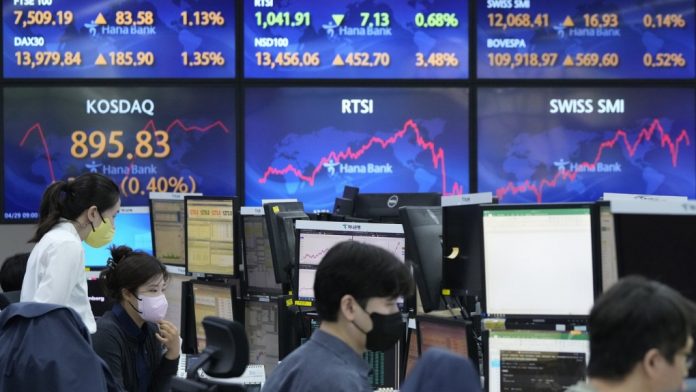 
“Today is really about Amazon and the read into corporate earnings and economic growth,” said Anish Chopra, managing director with Portfolio Management Corp.


The largest retailer reported a rare loss, which caused its shares to plunge 14 per cent as investors were disappointed with its revenue forecast that points to a potential slowdown in consumer spending.


The U.S. technology sector was especially hard-hit as the Nasdaq composite suffered its biggest monthly loss since the 2008 financial crisis. The S&P 500, which includes the so-called large cap FANG stocks – Facebook, Apple, Netflix and Google – ended its weakest month since the start of the pandemic.


“So I think Amazon has certainly crystallized investor concern around the growth prospects and the earnings prospects of the megacap U.S. tech names,” he said in an interview.


Amazon’s quarterly report reversed sentiment from the prior day in response to Facebook parent Meta Platforms beating expectations by posting a healthy profit.


All 11 major sectors on the TSX were lower, with nine losing at least one per cent.


Industrials was the biggest laggard, falling 2.8 per cent as shares of NFI Group Inc. plunged 15 per cent after the bus manufacturer cut its revenue forecast for the second time in seven months, citing a global shortage of microprocessors.


The energy sector was weaker as crude oil prices fell slightly but natural gas futures were up more than five per cent. Baytex Energy Corp. shares lost 7.6 per cent while Cenovus Energy Inc. was down 4.4 per cent.


The Canadian dollar traded for 78.17 cents US compared with 77.95 cents US on Thursday.


Eldorado Gold decreased 7.8 per cent to push materials lower even though bullion prices were higher.


May will begin next week with corporate earnings from retailers like Starbucks, U.S. consumer spending, an employment report for April and a Federal Reserve meeting in which interest rates are expected to be hiked, said Chopra.


“Certainly there’s some investor concern on whether the Fed will move more quickly than what investors could anticipate, so I think investors will be really tuned in to hear what the Fed is saying and tuned in to what the Fed actually does next week.”


This report by The Canadian Press was first published April 29, 2022.

Kourtney and Travis get married in Italy