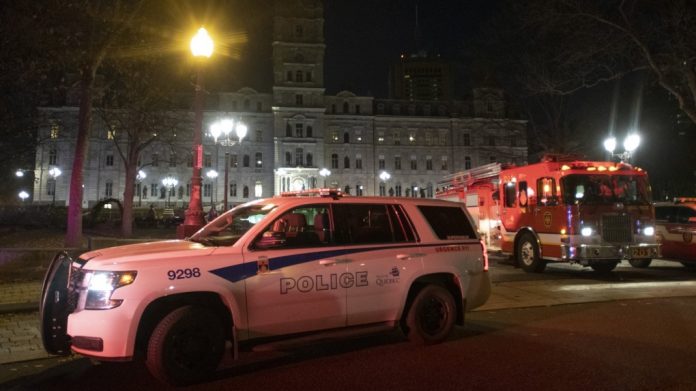 
The man accused of murdering two people with a sword in Quebec City on Halloween night 2020 testified Wednesday that after the second killing, he began to have doubts about what he called his “mission.”


Carl Girouard, 26, is charged with two counts of first-degree murder in the deaths of François Duchesne, 56, and Suzanne Clermont, 61, on Oct. 31, 2020, and he is also charged with five counts of attempted murder.


He admits to killing Duchesne and Clermont and injuring five others, but his lawyer will argue he was not criminally responsible at the time of the events because he was suffering from a mental disorder.


Girouard testified that his goal was to create chaos, change the world and encourage like-minded people — whom he called his “alter egos” — to continue his objective. He said that by the age of 18, he believed he had a “top secret” mission to kill and that his life would be sacrificed at the end of it.


After Clermont’s killing, though, he said he began to question his actions.


“I thought I would have a feeling of accomplishment, but that wasn’t the case,” Girouard told the jury. “I decided there shouldn’t be one more death, my own or anyone else.”


Girouard said his original plan was to attack people inside the Château Frontenac hotel in the historic district of the provincial capital. Finding the door locked, he left for a while before returning and attacking people in the streets near the hotel. He was armed with a Japanese-style sword called a katana with a 76.9-centimetre blade and wore black clothing and a short-sleeved kimono.


Girouard told the court he was fearful when he arrived in Quebec City and didn’t want to go ahead with his plan, but felt he had no choice. He described the killings as a duty.


“I went against my will, I didn’t want to, but I had to,” Girouard said. “I saw lots of people and I attacked them with my sword to execute my mission.”


Shackled and handcuffed in the witness box, he told the court the attack had to take place on Halloween because there would be a full moon. He said he chose Old Quebec because its historic buildings and statues reminded him of the medieval video games he adored.


Girouard said part of his plan had involved killing his family and setting their home on fire before driving to Quebec City, which is why police found gas canisters in his car. He didn’t go through with the ritual. “I told myself it wasn’t necessary,” he said.


Earlier, he told the court he became obsessed with video games in his teens — particularly ones involving swords and knives — and started to mix up reality and video games. He said he remembers telling himself “that we should live like in video games.”


Answering questions from his lawyer, Pierre Gagnon, Girouard described himself as two different people — one who went to work and lived in the real world and another who was mission-focused.


Gagnon asked which Girouard was speaking to the jury.


Obsession with his plan caused him to quit jobs frequently when he felt his colleagues were trying to get to know him. He said he avoided close relationships in order to remain focused on his objective. After the COVID-19 pandemic hit, he quit his job and played video games.


Girouard’s mother, Monique Dalphond, told the court earlier her son had a long history of problems. She said he was cited for inappropriate behaviour beginning in elementary school, adding that a child psychologist intervened and Girouard was medicated for a time.


She told the court her son got a credit card when he turned 18 and spent his money collecting katana swords and samurai outfits — his only interests, she said, other than video games. Girouard, she added, had “no real friends, girlfriend or social life.”


Dalphond told the court she first heard of her son’s plan when police knocked on her door after the attacks.


The Crown, which has argued that Girouard had made known as early as 2014 his plan to kill people with a sword, will continue with cross-examination on Thursday.


— By Sidhartha Banerjee in Montreal.

Saudi Arabia plans to send female astronaut to space in 2023