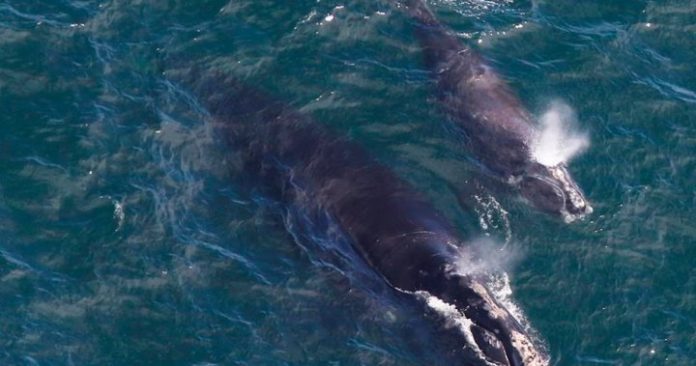 Researchers will be using the latest technology again this year to track the movement of North Atlantic right whales in the waters off Atlantic Canada in an effort to protect the endangered animals.

“One was patrolling the shipping zones to provide early warning systems about whales being present and to give Transport Canada and (the Fisheries Department) the information they needed to implement conservation measures, like requiring ships to slow down so they would not kill the whales as they were transiting the area,” Whoriskey said in a recent interview.

The second glider was positioned at the mouth of the Cabot Strait to try to detect the animals as they were first moving into the gulf.

The federal government announced in March that the Fisheries Department will once again implement fishing area closures in the Gulf of St. Lawrence and the Bay of Fundy after whales are sighted.

As of Wednesday, Transport Canada is again enforcing vessel traffic measures, including speed restrictions for vessels over 13 metres long, throughout much of the gulf.

It’s believed there are fewer than 330 North Atlantic right whales remaining, but Whoriskey says there were no reports of whale deaths in the Gulf of St. Lawrence last year, a sign that something is being done right.

“There’s no doubt we’re in a struggle,” Whoriskey said. “We have to do everything to foster the survival of the calves and protect the females which are going to be producing those calves.”

Sean Brillant, senior conservation biologist at the Canadian Wildlife Federation, said Thursday the whales are migrating up the U.S. east coast and some may have already entered Canadian waters.

2:01
North Atlantic right whale classified one class away from extinction

He said the number of calves spotted this year is promising.

“So far this year, there were 15 calves that were born. In 2017, this species had zero calves,” Brillant said in an interview.

“This species has just 330 animals or less. Probably about 100 and as few as 70 are females who are capable of having calves. So it is a very critically endangered species,” he said.

Brillant said the calves are a sign that the whales are getting the food and protection they need in the Gulf of St. Lawrence during the summer months. “It is a good sign they are having calves, but it doesn’t mean we’re out of the woods yet. We still have a long way to go to ensure we are protecting the species,” he said.

He said 20 or more of the whales die each year, and the new calves won’t be ready to breed for another nine or 10 years.

He pointed to one bright spot concerning the whales. One of the new calves was born to a whale named Snow Cone that in March 2021 was observed entangled in heavy fishing rope.

“This animal was partially disentangled by crews in both the U.S. and Canada … It is the first time we have seen an entangled whale who has given birth,” Brillant said.

He said scientists hope to spot Snow Cone this summer and possibly attempt to remove more of the rope, but he says that could be difficult if the calf is present. So far, the new calf has not been given a name.

This report by The Canadian Press was first published April 21, 2022.

B.C. Premier Horgan will ‘leave it to Soccer Canada’ to explain decision to host Iran