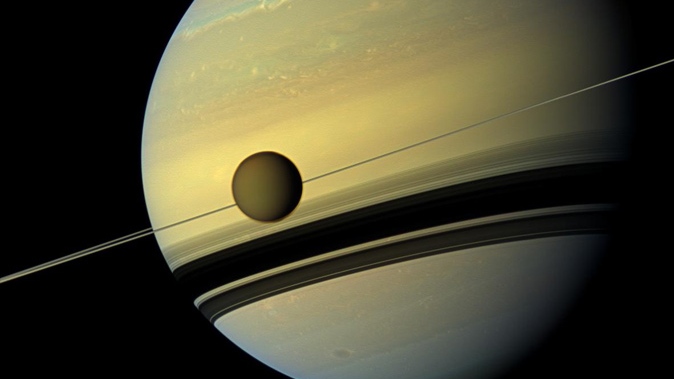 Researchers from Stanford University have modeled the surface of one of Saturn’s moons, revealing landscapes that bear a striking resemblance to those found on Earth.


The researchers detailed their findings in the journal Geophysical Researchers Letters earlier this month. They said on Titan, Saturn’s largest moon, you’ll find lots of rivers, lakes, sand dunes and canyons that will look quite similar to landscapes on Earth.


However, there’s a key difference between Earth’s landscapes and Titan’s. Instead of water, liquid methane fills the rivers and lakers on Titan.


The methane rivers, as well as winds, are key to how such an Earth-like landscape can appear on Titan. The researchers say abrasion of Titan’s rock sediments from these rivers and winds help form grains of sand and create a seasonal sedimentary cycle that drives these landscapes.


“Our model adds a unifying framework that allows us to understand how all of these sedimentary environments work together,” study author and Stanford University geologist Mathieu Lapôtre said in a news release published Monday.


This process is also similar to how sand dunes and other landscapes are created on Earth. Rocks and minerals erode over time from ocean waves, the flow of rivers and wind, forming grains of sand.


“As winds transport grains, the grains collide with each other and with the surface. These collisions tend to decrease grain size through time,” Lapôtre said.


But another key difference between Earth and Titan is that Titan’s sediments are thought to be composed of solid organic compounds, which were believed to be too fragile to form grains. The researchers said a process called sintering, where grains fuse with neighbouring grains to form one larger piece, may be able to counterbalance the fragility of these compounds and allow the grains of sand to maintain a stable size.


“We were able to resolve the paradox of why there could have been sand dunes on Titan for so long even though the materials are very weak,” Lapôtre said.


Titan has long been a topic of interest for astronomers due to its potential habitability. The researchers say their findings could be one piece of the puzzle on judging the prospects for life on Titan.


“We’re showing that on Titan – just like on Earth and what used to be the case on Mars – we have an active sedimentary cycle that can explain the latitudinal distribution of landscapes through episodic abrasion and sintering driven by Titan’s seasons,” Lapôtre said. “It’s pretty fascinating to think about how there’s this alternative world so far out there, where things are so different, yet so similar.”