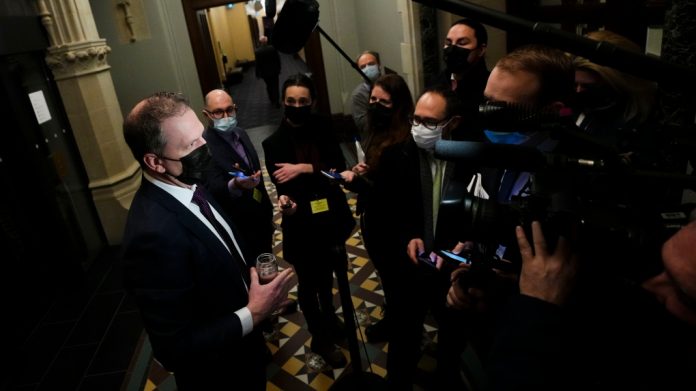 In a move typically not seen until closer to the end of the spring sitting, the Liberals have given notice for a motion looking to revive late-night House sittings, while also proposing to give ministers the temporary power to table ‘without notice’ a motion to adjourn the Commons until the fall.


These proposed new procedural changes are part of a multi-pronged motion put on notice by Government House Leader Mark Holland, looking to change some of how the House conducts its business through until the end of the spring sitting.


As it stands, other than a one week break in late May, the House is scheduled to sit straight through until June 23.


But should this motion pass as drafted, the Liberals would have the ability to rise in the Chamber, present “without notice, a motion to adjourn the House until Monday, September 19, 2022.”


The motion wouldn’t be granted any time for debate and would come to a vote immediately. While the move would need to be supported by the majority of MPs in order to pass, typically decisions to adjourn the House of Commons early are taken by unanimous consent.


In an interview, Holland said while it isn’t spelled out in the motion, it’s his “intent” to only use this clause in the final week of the sitting. He said that it would be used in a situation where if MPs get all of their work done during one of the late nights in the Chamber, it’d facilitate adjourning right then rather than having to come back the next day just to wrap things up.


“We have no intention of not sitting until the end of June,” Holland said, committing it wouldn’t be used to pull the plug on the sitting weeks early. “The whole purpose around this [motion] is to give us more time to get more done.”


What they’re proposing with respect to this motion is, is absurd,” he told CTVNews.ca, equating the power to giving Prime Minister Justin Trudeau the power to “shut down Parliament,” while taking away tools opposition parties have to hold the government to account.


“There are significant issues that this country is facing,” he said, citing inflation, the war in Ukraine, the study into the invocation of the Emergencies Act, and the recently-revived questions around the RCMP investigating the prime minister’s Aga Khan vacation.


“We should be focused on working on those issues,” said Brassard.


In contrast to the move to potentially wrap up the spring sitting early, the Liberals are also looking to enact the ability for sitting days to be extended until midnight to build in more debate time for government business.


The motion proposes that any minister, with the backing of a House leader from one of the opposition parties, could rise in the House right up until 6:30 p.m. and request that the adjournment hour be extended to 12:00 a.m., or at whenever point earlier in the evening that the debate collapses.


Under this change, on opposition days their motions would still have to wrap up by early evening before spending the night on Liberal legislation. It also prohibits moving “dilatory motions” such as moving to have the House adjourn or proceed to another phase of business.


It’s become common for the government to move to extend sitting hours in the final weeks before the summer break, but this motion is coming nearly two months before the scheduled adjournment.


These proposals come alongside a few other programming changes spelling out altered processes for when certain motions and votes such as those on the estimates can be moved or held, with the potential to defer some to the fall.


The Conservatives have also suggested that the way the motion is worded around quorum could see minimal participation in these debates from Liberal MPs, while also encroaching on time typically used for MPs to travel to and from their ridings.


While extending the sitting hours grants MPs more time to debate key bills, it also has implications for the House of Commons administration, resulting in late nights for all staff who work to keep the building up and running as well as having knock-on effects for parliamentary committees.


“It’s been well documented how far those resources have been stretched as a result of the virtual sittings,” Brassard said. “To propose to extend the hours is in my view, not the right course of action at this point.”


While Holland said he’d prefer to not have to spend the spring burning the midnight oil, from his perspective, advancing this motion is all about adding debate time to see movement on their legislative agenda before a months-long summer hiatus. And, that procedural motions like this are only needed because of the Conservatives’ “pattern of obstruction.”


One recent example cited by the Liberals is Bill C-8, which seeks to implement budgetary measures from the December 2021 fiscal update. After being tabled late last year, it’s still working its way through the House after more than 10 days of debate. Holland said the only party still indicating they have MPs who want to speak to this bill are the Conservatives, while the Conservatives claim the Liberals have avoided imposing time allocation because it wouldn’t be supported by the NDP.


“If they want to have all of that additional time to speak, we need more hours in the calendar. It is not acceptable to Canadians that we are not passing legislation,” Holland said.


Asked about the charge of being unduly obstructionist, Brassard accused the Liberals of pushing a “false narrative,” and failing to use the existing mechanisms in the House to move their bills along.


“They’re going try to make every excuse in the book to justify this,” he said. “I’m not going to accept any blame for the government mishandling their legislative agenda.”


And, beyond the time-limited elements of the motion, the Liberals are also looking to make a permanent change to the Standing Orders—the rules that govern the House of Commons—to change the guidelines for sitting around holidays.


The motion seeks to update the list of federal holidays on which the House would not sit to include Easter Monday and the National Day for Truth and Reconciliation. It also changes “Dominion Day” to “Canada Day,” and specifies when some holidays fall on Tuesdays, MPs wouldn’t sit the day prior, nor would they sit on the Fridays following holidays that fall on Thursdays.


While this move isn’t likely to be contentious, convention in the House has been to only make changes to the Standing Orders with the support of all parties. There is a scheduled review upcoming of the Standing Orders, and the Conservatives are questioning why the government didn’t wait to suggest this housekeeping change through that process. Holland said it was his intention to not use additional House time to deal with this “minor” administrative matter.


The motion is set to be presented and brought up for debate in the House “immediately,” and Holland says he’s open to “reasonable” amendments, which Brassard has signalled will be coming.


“I think there’s some things that we can work through on this… I’m going to work with the Government House leader to try to make this thing work other than you know, the sledgehammer that it appears to be.”


Either way, the Liberals are hopeful that their confidence-and-supply deal partners the NDP will be backing their proposal.