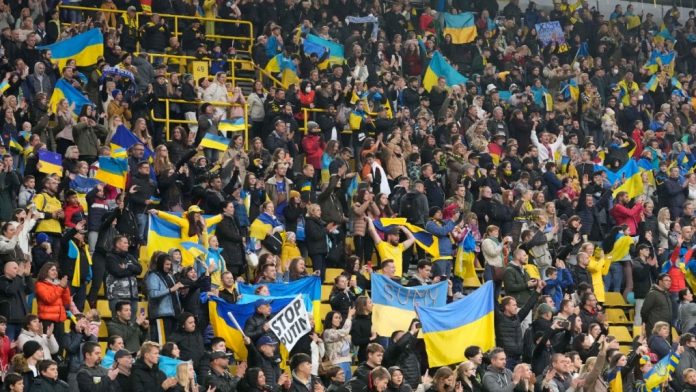 
The Ukrainian soccer season has officially been called off because of the Russian invasion, creating a path for Shakhtar Donetsk and Dynamo Kyiv to be entered in next season’s Champions League.


The league said after a video conference with clubs Tuesday that the standings as of Feb. 24, when the Russian invasion began and games were suspended, will be declared final “because the championship cannot be played to completion.”


Shakhtar was the leader at that time but the league said no official award of a title would be made.


The standings could decide qualification for European competitions next season if Ukrainian clubs are able to take part. The league’s decision must be approved by the Ukrainian soccer association, which would have to submit competition entries to UEFA by early June. That includes two places in the next Champions League.


The Ukrainian league champion was due to enter the qualifying rounds in the playoffs in August, needing to beat one opponent to advance to the group stage.


However, one possible scenario is that Shakhtar can be upgraded to the group stage to take the direct entry protected for the champion of the Russian league, currently expected to be Zenit St. Petersburg.


UEFA has banned all Russian teams from its competitions because of the war and it is unclear how that sanction will be lifted before next season. Ukraine, as the national league ranked No. 12 by UEFA, would be next in line for getting the direct entry Russia could be forced to give up.


Of the 16 teams in the league, FC Mariupol’s home stadium is now in territory under Russian control and the stadium of Desna Chernihiv was wrecked by bombardments that collapsed part of a stand and left a deep crater in the field.


Ukraine’s two biggest teams, Shakhtar and Dynamo, are each touring Europe to play a series of charity games against clubs from around the continent to raise funds for people affected by the war.


Shakhtar previously had to leave its home city of Donetsk in 2014 when it was taken over by Russia-backed separatists and has since been based elsewhere in Ukraine, as has Zorya Luhansk, another first division club.


Dynamo was second to Shakhtar in the now-suspended league standings and could be entered for the Champions League in the second qualifying round. The draw for that round is scheduled for June 15 at UEFA headquarters in Switzerland with games to be played from July 19-27.


Third-place Dnipro could be entered in the Europa League, joining in the playoff round in August. The fourth- and fifth-place teams, Zorya Luhansk and Vorskla Poltava, are in line to enter the qualifying rounds of the Europa Conference League.


It is far from clear how Ukrainian clubs will retain and sign players for next season, and where they would prepare for and play domestic and international games.


The Ukrainian men’s national team is still in contention to qualify for this year’s World Cup. Ukraine is set to play Scotland in a postponed qualifying playoff game on June 1 in Glasgow with the winner to face Wales four days later in Cardiff for a place at the tournament in Qatar.

Will abortion upend American politics? Here’s what the early polling tells us