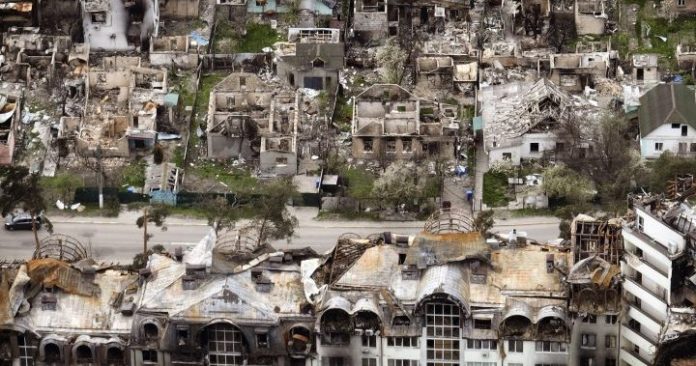 Ukrainian forces fought village by village Saturday to hold back a Russian through the country’s east, while the United Nations worked to broker a civilian evacuation from the last Ukrainian stronghold in the bombed-out ruins of the port city of Mariupol.

An estimated 100,000 civilians remain in the city, and up to 1,000 are living beneath a sprawling Soviet-era steel plant, according to Ukrainian officials. Ukraine has not said how many fighters are also in the plant, the only part of Mariupol not occupied by Russian forces, but the Russians put the number at about 2,000.

United Nations work to broker an evacuation of civilians from Mariupol

Russian state news outlets reported Saturday that 25 civilians had been evacuated from the Azovstal steelworks, though there was no confirmation from the U.N. or Ukrainian officials. Russia’s RIA Novosti news agency said 19 adults and six children were brought out of the plant, but gave no further details.

Video and images from inside the plant, shared with The Associated Press by two Ukrainian women who said their husbands are among the fighters refusing to surrender there, showed unidentified wounded men with stained bandages in need of changing; others had open wounds or amputated limbs.

2:20
Kelowna woman born and raised in Russia denounces her homeland for the war in Ukraine

A skeleton medical staff was treating at least 600 wounded people, said the women, who identified their husbands as members of the Azov Regiment of Ukraine’s National Guard. Some of the wounds were rotting with gangrene, they said.

In the video the women shared, the wounded men tell the camera they eat once a day and share as little as 1.5 liters (50 ounces) of water a day among four. Supplies inside the surrounded facility are depleted, they said.

The AP could not independently verify the date and location of the footage, which the women said was taken in the last week in the warren of passageways beneath the steel mill.

Over 1 million have evacuated from Ukraine to Russia since Feb. 24: Russian minister

One shirtless man spoke in obvious pain as he described his wounds: two broken ribs, a punctured lung and a dislocated arm that “was hanging on the flesh.”

“I want to tell everyone who sees this. If you will not stop this here, in Ukraine, it will go further, to Europe,” he said.

Getting a full picture of the unfolding battle in the east has been difficult because airstrikes and artillery barrages have made it extremely dangerous for reporters to move around. Both Ukraine and the Moscow-backed rebels fighting in the east also have introduced tight restrictions on reporting from the combat zone.

But Western military analysts suggested that Moscow’s offensive in the eastern Donbas region, which includes Mariupol, was going much slower than planned. So far, Russia’s troops and Moscow-backed separatist forces appeared to have made only minor gains in the month since Moscow said it would focus its military strength in eastern Ukraine.

Numerically, Russia’s military manpower vastly exceeds Ukraine’s. In the days before the war began, Western intelligence estimated Russia had positioned near the border as many as 190,000 troops; Ukraine’s standing military is about 200,000, spread throughout the country.

In part because of the tenacity of the Ukrainian resistance, the U.S. believes the Russians are “at least several days behind where they wanted to be” as they try to encircle Ukrainian troops in the east, said a senior U.S. defense official who spoke on condition of anonymity to discuss the American military’s assessment.

With plenty of firepower still in reserve, Russia’s promised offensive still could intensify and overrun the Ukrainians. Overall, the Russian army has an estimated 900,000 active-duty personnel. Russia also has a much larger air force and navy than Ukraine.

Hundreds of millions of dollars in military assistance has flowed into Ukraine since the war began, but Russia’s vast armories mean Ukraine’s needs are nearly inexhaustible.

In Mariupol, city officials have described dire shortages of food, water and medicine. U.N. humanitarian spokesman Saviano Abre said the world organization was negotiating with authorities in Moscow and Kyiv but that he could not not provide details of the ongoing evacuation effort “because of the complexity and fluidity of the operation.”

“There is, right now, ongoing, high-level engagements with all the governments, Russia and Ukraine, to make sure that you can save civilians and support the evacuation of civilians from the plant,” Abreu told the AP. He would not confirm video posted on social media that claimed to show U.N.-marked vehicles in Mariupol.

The ferocity of the fighting has stunned the world. In the U.S., Pentagon press secretary John Kirby grew emotional Friday as he discussed the “brutality” and “depravity” of the invasion ordered by Russian President Vladimir Putin.

“It’s hard to look at what he’s doing in Ukraine, what his forces are doing in Ukraine, and think that any ethical, moral individual could justify that,” Kirby, a retired rear admiral, told reporters. “It’s difficult to look at some of the images and imagine that any well-thinking, serious, mature leader would do that. So, I can’t talk to his psychology. But I think we can all speak to his depravity.”

For those in the Mariupol steel plant, a vast underground network of tunnels and bunkers has provided safety from airstrikes. But the situation has grown more dire after the Russians dropped “bunker busters” and other bombs on the plant, the mayor said Friday.

The women who said their husbands are in the plant as part of the Azov Regiment said they feared soldiers will be tortured and killed if they are left behind and captured by the Russians. They asked for a Dunkirk-style mission to evacuate the fighters, a reference to the World War II operation launched to rescue surrounded Allied troops in northern France.

“We need to do this right now,” said Kateryna Prokopenko, 27, speaking to the AP in Rome.

The Azov Regiment helping to defend the steel plant has its roots in the Azov Battalion, which was formed in 2014 by far-right activists at the start of the separatist conflict in eastern Ukraine. Russia has referred to the regiment’s past while attempting to justify the invasion.