UN invites Syrian opponents to constitution talks on May 28 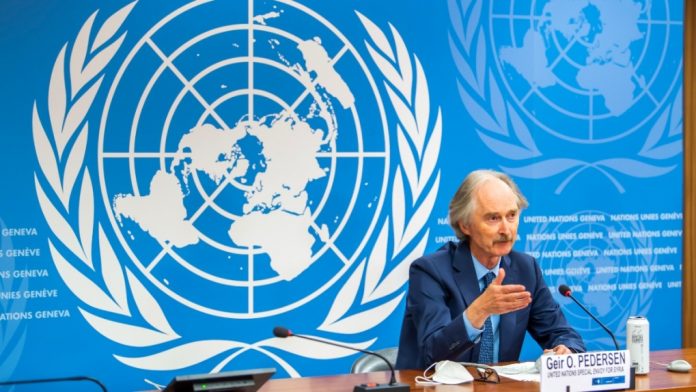 
The UN special envoy for Syria announced Tuesday that he has sent invitations to the Syrian government and the opposition for an eighth round of talks starting in late May, aimed at revising the constitution of the conflict-torn country.


Geir Pedersen told the UN Security Council that agreement on a revised constitution could contribute to a political solution of the 11-year conflict.


He said the seventh session of the Syrian Constitutional Committee ended on March 25, with delegations offering “at least some revisions to some of the texts presented.”


Pedersen said deputy special envoy Khawla Matar visited Damascus and Istanbul afterward for further discussions with the committee’s co-chairs and he had issued invitations for the eighth session Tuesday from May 28 to June 3 in Geneva.


He stressed that the drafting process will only move forward if the committee’s work is “governed by a sense of compromise and constructive engagement aimed at reaching general agreement of its members.”


A 2012 UN road map to peace in Syria approved by representatives of the United Nations, Arab League, European Union, Turkey and all five permanent Security Council members calls for the drafting of a new constitution. It ends with UN-supervised elections with all Syrians, including members of the diaspora, eligible to participate. A Security Council resolution adopted in December 2015 unanimously endorsed the road map.


At a Russia-hosted Syrian peace conference in January 2018, an agreement was reached to form a 150-member committee to draft a new constitution. A smaller, 45-member body would do the actual drafting, including 15 members each from the government, opposition and civil society. It took until September 2019 for the committee to be formed and little progress has been achieved so far.


Pedersen stressed to the council in a video briefing that “Syria is a hot conflict, not a frozen one.”


He said airstrikes have increased in the northwest, there have been intensified clashes around Afrin and the northeast, and continued exchanges of rocket fire and shelling across all frontlines as well as improvised explosive devices, car bombs and other security incidents.


Pedersen urged the council to focus on Syria.


“The current strategic stalemate on the ground and Syria’s absence from the headlines should not mislead anyone into thinking that the conflict needs less attention or fewer resources, or that a political settlement is not urgent,” he said. “Indeed, a conflict of this scale requires a comprehensive solution” in line with the 2012 road map.


While the war in Ukraine is quickly catching up, Pedersen said “Syria remains the biggest displacement crisis in the world” with 6.8 million refugees and 6.2 million people displaced in the country — “half the pre-war population.”


Assistant Secretary-General for Humanitarian Affairs Joyce Msuya also warned that as the world turns to other conflicts “Syria is on the verge of becoming yet another forgotten crisis.”


“Yet millions of Syrians struggle each month to survive, to feed their families and to provide a future for their children,” she said. “For many, their situation has never been more dire since violence erupted in 2011.”


Msuya said “a staggering 4.1 million people” in rebel-held northwest Syria need humanitarian aid, with almost a million people, mainly women and children, living in tents, “half of which are beyond their normal lifespan.”


In early July 2020, China and Russia vetoed a UN resolution that would have maintained two border crossing points from Turkey to deliver humanitarian aid to Syria’s northwest Idlib. Days later, the council authorized the delivery of aid through just one of those crossings, Bab al-Hawa. That one-year mandate was extended for a year on July 9, 2021.


Msuya told the council that last year the UN sent some 800 trucks of cross-border aid to the northwest each month, “consistently reaching 2.4 million people.”


Russia’s UN Ambassador Vassily Nebenzia has said aid should be controlled by the Syrian government, its ally, and delivered across conflict lines.


Msuya said three cross-line convoys have been sent to the northwest but they cannot substitute for cross-border aid deliveries at this point.


Nebenzia called this “mere unwillingness to solve the problem of humanitarian deliveries from Damascus to Idlib.”


“Let me be frank, in such circumstances, we can hardly see any reason why the cross-border resolution should be renewed again,” he said.


.@GeirOPedersen #Syria is a hot conflict, not a frozen one… The conflict also still gives rise to threats to international peace and security of the first order… Syria is still among the greatest humanitarian crises of our era.

Boat with up to 20 people onboard capsizes during severe thunderstorms

Planting Canada’s 2022 crops could be ‘most expensive ever’