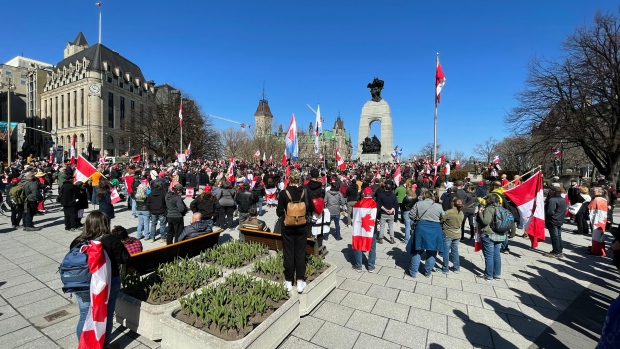 Hundreds of motorcycles rolled through downtown Ottawa on Saturday as part of the weekend Rolling Thunder Ottawa rally.

Earlier in the morning, crowds gathered at the National War Memorial near Parliament Hill.

One person was arrested on Elgin Street, Ottawa police confirmed through Twitter.

Officers were deployed with helmets and shields to help control the crowd. Seven people were arrested for various charges, including assaulting police. Some of the arrests were for breach of undertakings, police confirmed Saturday morning.

This weekend’s events are being organized by several people who took part in the weeks-long occupation of city streets during the self-described Freedom Convoy earlier this year.

“I’m here for the veterans,” said Sonny, a demonstrator draped in a Canadian flag at the National War Memorial. “It’s a rally. Not a protest.

“We’re going to leave right afterwards. We’re giving honour and respect back to this country.”

The schedule issued by organizers also includes an afternoon rally on Parliament Hill.

While police shared the expected route for the hundreds of motorcyclists driving through downtown on Saturday, they also established a vehicle exclusion zone starting Thursday evening. Pedestrians, cyclists, public transit and other vehicles may enter the secured area, but not motorized vehicles involved in the Rolling Thunder event.

Special no-parking zones are also being set up in nearby neighbourhoods. A counter-protest also gathered at the National War Memorial earlier on Saturday.

“We came here to let people know that’s a fringe. They do not represent all veterans, our nation or anything,” said Clayton Goodwin, a counter-protester and veteran. “That is a monument owned by Canada, not veterans. Not to be politicized. You tore down fences and politicized it.”

On Saturday morning, the City of Ottawa’s bylaw services branch posted on Twitter that it had issued 417 tickets and towed 30 vehicles. Police have also towed three vehicles so far, for a total of 33.

Police also tweeted that a vehicle removed by bylaw officers on Friday attempted to enter Ottawa on Saturday but was stopped, inspected and placed out of service.

Three tickets were also issued for noise and smoking violations.

Before the weekend, organizers indicated they would leave after a Sunday morning church service in the Vanier neighbourhood of Ottawa, according to police.

Police now pushing people off street down Elgin on sidewalk, as calls from people to return to tomb. Arrest made as this takes place <a href=”https://t.co/4PKU8ZIz4N”>pic.twitter.com/4PKU8ZIz4N</a>