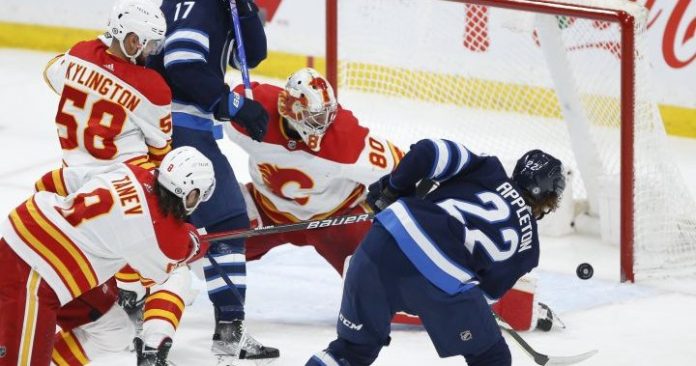 Connor Hellebuyck found some satisfaction with backstopping the Winnipeg Jets to a 3-1 victory over the top-flight Calgary Flames on Friday.

Blake Wheeler, Mason Appleton and Brenden Dillon scored for Winnipeg (38-32-11), which concludes its season Sunday afternoon against the Seattle Kraken.

“It’s nice, but it doesn’t put a Band-Aid on anything. It still sucks,” Hellebuyck said of the Jets missing the playoffs.

“But it is nice knowing that we can win and we’re not giving up, so that’s awesome.”

Hellebuyck made 32 saves for the Jets, who are wrapping up their campaign with a four-game homestand (3-0-0) that also includes victories over Colorado and Philadelphia. Eric Comrie is expected to start in net against Seattle.

Matthew Tkachuk recorded his 42nd goal of the season for the Flames (50-22-11), who were on a seven-game point streak (5-0-2) heading into their last game of the regular season.

Calgary head coach Darryl Sutter said his team will be up for playing either Nashville or Dallas in the first round of the Stanley Cup playoffs.

“They’ve done everything we wanted them to do this year,” he said. “You just ask them to own their preparation and own their performance, and they’ve done a good job of that.

“First off, you’ve got to find out who the hell we’re playing. And then the next part is, you’ve got to give these guys a little bit of a break here, right?”


Flames forward Mikael Backlund was looking forward to finding out their opponent and said the team has ended the season on a high note despite the loss to the Jets.

“Today, (we) came out (and) had a really good first period, let it slip a bit in the second and made it a pretty tight game in the third. Pretty even game,” he said. “That was our mission, we wanted to keep playing all the way till the end and have a good feeling going into the playoffs.”

Tkachuk extended his point streak to eight games (five goals, seven assists) with an unassisted goal at 3:19 of the opening period.

After he blocked a shot by defenceman Dillon, he collected the puck for a breakaway. Hellebuyck got a piece of Tkachuk’s shot, but the puck still went over the line.

“That’s the competitive spirit that he has,” Jets interim coach Dave Lowry said of Hellebuyck shutting the door after Tkachuk’s goal.

“I know that we all didn’t like the first one, but give them credit, they got in behind (the defence), stayed on the puck but I really liked that we continued to play. We got better. The power play helped generate some momentum for us.”

Calgary took a pair of penalties midway through the first period, giving the Jets a five-on-three for 1:18 they couldn’t capitalize on. Vladar stopped Wheeler close in, then leading-scorer Kyle Connor shot wide of the net.

Wheeler made good on his opportunity with 13 seconds left in the period, using a backhand cross-ice pass from Nikolaj Ehlers to fire a one-timer past Vladar his 16th of the season.

Calgary outshot Winnipeg 18-12 in the first period, but the Jets flipped it to 19-8 in their favour during the second.

Appleton gave Winnipeg the 2-1 lead at 6:06 of the middle frame off a rebound from defenceman Josh Morrissey’s point shot.

Appleton was asked if the team was playing for pride.

“It was exactly that,” he replied. “An average start, they had a couple chances but Bucky made some good saves. And then from there we poured on the shots.”

Hellebuyck denied Tyler Toffoli on a close shot with under three minutes left in the period.

Dillon scored into an empty net with 20 seconds remaining.